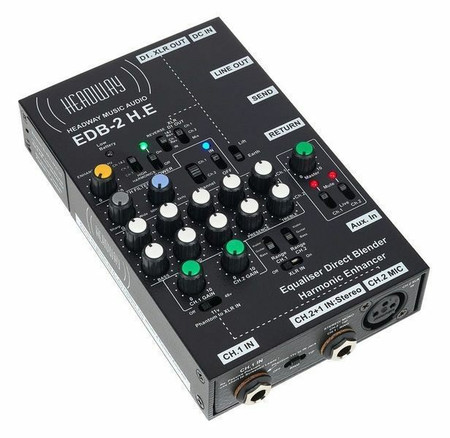 Submit a product review & get 100 BassBucks for each publishable review!

(you must use your real name to get credit)

This preamp is a real problem-solver - a good, relatively affordable option for blending a mic and a preamp. Certainly, we have a couple really nice preamps to do that, but if you can't or won't justify spending $700-1000 for a preamp, there just don't seem to be very many choices. We used to stock the previous version of the Headway, but they became unavailable for a while, so that option went away.

But now they're back, and this new version even fixes the shortcomings that the old version had. For instance, there is now a separate EQ section for each channel (the old version had a single EQ that could be shared or used one either channel alone). There are also independent channel mute switches, as well as true 48v phantom power on the XLR input. Read on to find out more!

Designed and distributed by Headway, in Oxfordshire, England, this versatile preamp gives you two channels for input. Those inputs have switchable impedance levels to get the optimal sound from various pickups and mics. Channel 1 is a 1/4" input, which can receive 11v phantom power. Channel 2 is a smart jack that can either be for an instrument input, or a two-channel TRS input (splitting channel 1 and channel 2 out on one jack). If that weren't enough, it adds an option for a microphone input on Channel 2, using a real XLR input (with optional phantom power - switchable for 11v or 48v)... with all of those options, you have a real "solution box" that can do most anything.

It's kind of hard to get into the totality of all that this box can do without having your eyes glaze over, but I'll try...
As I mentioned above, it has an appropriate input with phantom power, so it can run most any condenser mics (the DPA 4099B mic works very well). You can blend that with a piezo-electric OR magnetic pickup plugged into channel 1; so, a Realist, a Bass Max, a Full Circle, a Headway Band, a Krivo - even the Ehrlund EAP (I have heard from several people who have used the Headway in place of the OEM preamp from Ehrlund.)

Or, you can use this preamp in place of one of the K&K Systems - like the Bass Master Rockabilly or the Bass Master Pro - because the channel-2 1/4" input can accept a TRS (stereo) input cable and split out the two channels for you to blend as you see fit. We have also confirmed through testing that it works perfectly to replace the preamp in the Golden Trinity Microphone series, so it is an excellent upgrade to those mic/pickup setups. So it replaces the pocket preamp included with those systems (and we even sell the transducer networks separately, if you want to assemble a custom system - just ask!)

It has an effects loop on channel 1; this could be handy when using for rockabilly - put a little slap-back reverb on your "clicky" pickup without muddying up the main bass tone. Or, perhaps put a compressor or other effect on one of your inputs. (Loop is only available to channel 1 and cannot be assigned to channel 2).

You can even use it for jamming along with tunes at home - it has a 1/8" auxillary input that you can use for i-devices, MP3 players, and the like. Cool!

The preamp has a 1/4" output for sending to your stage amp, as well as a DI output (for sending to the house soundboard/PA) on a standard XLR with a ground lift. There are separate gain controls for each channel, and a master volume (with a mute switch for each channel so you could even use the same preamp to swap between instruments).

The semi-parametric, fixed-depth (-12dB) notch filter allows you to "dial in" problem frequencies that are causing feedback or wolf tones, and notch them out with a very thin frequency cut; you can adjust that frequency, as well as the "Q" (which is how wide a swath you're cutting) to kill feedback with surgical precision. It can be applied to one of the two channels (you'd usually use it on the mic channel when using a mic.)

There is a NEW five-band interactive Baxandall EQ (Bass, Low Mid, High Mid, Presence, Treble) for each channel (the old model only had one EQ.) The controls can boost or cut, and have clear "detents" at their midpoints to indicate the flat setting.

You can flip the phase of either channel 1 or channel 2 (or neither) to improve tone, correct phasing issues, or fight feedback.

Each channel on the preamp has a "range" switch - most of my customers will set it to "Bass," I would think - to optimize the tone and response for your instrument; it applies a low-cut filter based on the instrument used, in order to remove the rumble and noise of subsonics.

The preamp can be powered by the 18V, 200mA power supply or two 9V batteries (included).

The case for the unit was thoughtfully designed with a pre-threaded mounting hole on the bottom - you can screw it right onto a standard mic stand for easy access!

It also features a new harmonic enhancer. This thing is a real Swiss Army Knife!

MSRP:
Our Low Price: Special Price: $629.00
Regular Price
The mad scientists at Acoustic Image are at it again. Never content to rest on their past successes, Rick Jones and company are constantly looking for new, better, more efficient ways to help...

Free Shipping:
To All 50 US States

MSRP:
Our Low Price: Special Price: $295.00
Regular Price
Note: All of our in-stock Red-Eye Twin preamps feature the newest revision, which is updated with the ground lift. A longtime customer turned me on to these preamps from Fire-Eye, a custom...

Free Shipping:
To All 50 US States

MSRP:
Our Low Price: Special Price: $18.50
Regular Price
This high quality speaker cable is ideal for high powered instrument amps, such as the Acoustic Image, Euphonic Audio, and Genzler amps (among others) to connect from the amplifier to a speaker,...

MSRP:
Our Low Price: Special Price: $12.50
Regular Price
Features one straight ¼" plug and one Speakon connector. This custom, American-made cable is ideal for medium powered amps, such as the Acoustic Image, Euphonic Audio, and Genzler...

MSRP:
Our Low Price: Special Price: $6.00
Regular Price
Get a kit which contains everything you need to mount your compact K&K, Schatten, LR Baggs, or other small beltpack preamp to your tailpiece - without any modifications to your valuable...

MSRP:
Our Low Price: Special Price: $1,255.00
Regular Price
The FELiX2 is the newly improved/updated version of the (already fantastic) original model. See below for the updated features if you're already familiar with the FELiX, or read on for the full...

MSRP:
Our Low Price: Special Price: $40.00
Regular Price
We've had many requests for AC adaptors for the 9 volt battery K&K preamps, and are very happy to announce that K&K Sound has begun producing one. Using an off-the-shelf AC adaptor can be...