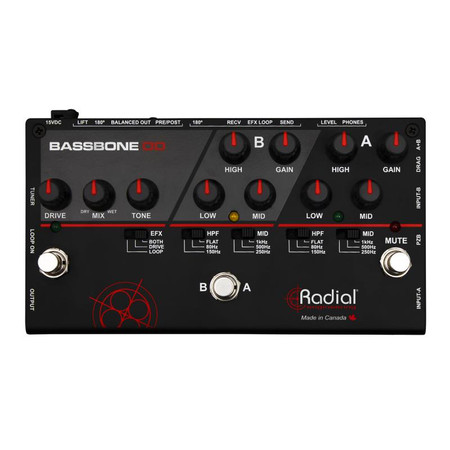 Often, we upright bassists find ourselves doubling on upright and electric basses on a single gig, and it's almost always a hassle. We have two completely different instruments that require different EQ as well as different volume levels, so what do you do? Worse yet, an upright bass (or passive electric upright) using piezo pickups requires a high-impedance input to sound its best, and a lot of amps just don't have that sort of buffering built in. And there are not a lot of bass amps with two channels, so we end up dragging A/B switches, multiple preamps, and other gear like equalizers to compensate.

And I'll bet I'm not the only one who has played "musical cables" plugging and unplugging cords in the middle of a set! But now, a decade after releasing the original BassBone (which solves some, but not all, of those problems) the Radial Engineering folks have created this update to the BassBone - a preamp with buffering, switching, true EQ, and tons more features that you can read about below. You'll also see a diagram below that we put together to display how you can hook it up to your gear.

So many features are packed into this small, footswitchable box that it seems almost impossible.

The Bassbone OD has two instrument input channels, each of which is fully equipped with level control, a semi-parametric equalizer and low frequency resonance filter. This is a change from the previous BassBone model, which had an EQ on one channel, and a few limited "shaping filters" on the other channel. This new model gives a true bass and treble EQ control, as well as a mid control that has a switchable frequency (3 choices) -- all of which are voiced for bass. On BOTH channels. This is a big win, for dialing in your sound - on BOTH basses.

Both channels ALSO feature a High Pass Filter, which can be an excellent tool for reducing rumble and feedback, especially on acoustic instruments, by cutting the very low "subsonic" frequencies that don't add anything but "mud" to your sound. So it "tightens up" the sound and reduces feedback issues.

Most important to doublers, Channel "A" has a "PZB booster" to increase the sensitivity and load to 10 meg ohms (!) to optimize it for use with the piezo transducers that you usually find on upright basses and electric uprights. Meanwhile, Channel "B" is equipped with Radial's "Drag Control" load correction, which can help to optimize the tone and feel when you're using a vintage passive instrument, like a P-Bass. It'll help you to dial in that more "vintage" tone if that's what you're after.

Toggling between channels is done using a footswitch and both channels may alternatively be mixed together by depressing the blend switch (which is great if you have a mag pickup and a piezo on a single upright bass, and want to blend them together!)

You can output to a stage amp (¼’ output), with a separate dedicated (and buffered) tuner output (which is not affected by the "Mute" for quiet tuning). One of Radial's highly regarded low-Z balanced DI outputs is the perfect feed for the PA system. An effects loop with separate send & receive jacks enables multiple pedals or effects units to be added. It even has a built in headphone jack - with its own separate volume control - for quiet rehearsing or on-stage monitoring!

For the electric player (and the adventurous upright player) you also get a great-sounding on-board bass overdrive with full control over the drive level, tone and a wet-dry mix that lets you add slight grit -- or over the top distortion(!) -- to your bass tone.

And, as always, Radial Engineering builds solid gear; you can't wiggle the controls, this thing is built to last. I always like to say that you could use this thing to bang nails into the wall to hang your band banner, then use it on the gig. It's tough!

This is a perfect Doubling Tool - it's the upright-friendly BassBone I've been begging Radial to make for over 5 years now. And it's finally here!

More details to be added soon.

The second image in the array illustrates how instruments and devices can interface and be controlled by the Bassbone. Of course, only the Bassbone and its AC adaptor are included.

According to California state law, if you are a resident of California, we
must notify you that this product contains chemicals known to the state
of California to cause cancer, birth defects or other reproductive harm.

Standard Warranty:
All products sold by RADIAL come with a 1-year limited warranty. This limited warranty protects you against defects in workmanship. The warranty does not cover any consequential or inconsequential damage or any losses. Specifically, if you have a problem due to defect, you must make the arrangements and cover the costs to return the product to us with a copy of the original sales invoice and we will repair the product and return it to you at our cost. All warranty claims require a return authorization. Contact the RADIAL service department for details.

Transferable 3-Year Warranty:
Some RADIAL products come with a 3-Year Transferable Warranty. This means that if you buy the product and decide to sell it, the warranty can be transferred to the person that buys it, thus providing continuous warranty support and added value. This Transferable Warranty follows the same procedures and limitations outlined in the Standard Warranty. This means that if you sell the product, you must provide the buyer with a copy of your original invoice so that he, in turn, may be able to submit this should a warranty claim be required.

Warranty Limitation:
As with all typical warranties, only manufacturing defects are covered. Furthermore, parts that are subject to wear and tear such as switches, potentiometers and tubes are not covered under this warranty. This, however, does not mean that these will not be repaired or replaced free of charge. We pride ourselves in supporting the products we sell and will often exchange these parts free of charge pending the age of the device. This decision will be undertaken by RADIAL and in no way obliges the company to perform such tasks.
View AllClose

MSRP:
Our Low Price: Special Price: $209.99
Regular Price
No fuss, great sound, and bulletproof construction.Sometimes you like to keep things simple. If you're considering adding a preamp to your rig, but you're not the type of player who likes fussing...

MSRP:
Our Low Price: Special Price: $16.50
Regular Price
This standard 20-foot mic cable is nicely flexible - and well-made! It's an affordable, and trouble-free, Microphone Cable. Includes a manufacturer's guarantee against defect.Uses for the Upright...

MSRP:
Our Low Price: Special Price: $349.00
Regular Price
Newly updated version of the EDB-2 Preamp! This preamp is a real problem-solver - a good, relatively affordable option for blending a mic and a preamp. Certainly, we have a couple really nice...

MSRP:
Our Low Price: Special Price: $319.95
Regular Price
For many years, Fishman's Pro-EQ Platinum Preamps have been very solid, feature-laden performers for upright bassists and other acoustic instrumentalists. Bob himself has used (and often...