Lots of journeyman (and women) players have gotten to gigs and found that they need to mic the bass unexpectedly. The old Bluegrass trick is to slip a mic into a gym sock, and drop it behind the tailpiece against the body. Sure, it works (kind of), but it's not exactly hi-fi!

Ve Leen Music in Sweden has come up with a pair of simple brackets, called the "BassOnStage" - and they sell it (in Sweden) along with a gooseneck. You can order it from them direct. But they supply it with Euro mic threads; you'll need to get adapters to use it with mic clips in the USA. You'll also deal with international shipping, payments, etc.

Gollihur Music to the rescue! We've purchased a bunch of the custom brackets that they made up, and sourced other parts to complete the kit here in the USA. We even include TWO gooseneck options, and a quality mic clip. So you get a complete, expanded setup, shipped from the USA, with no shipment complications or surprises. 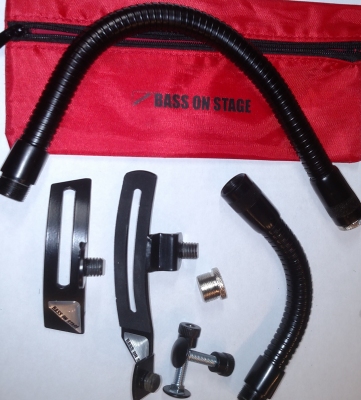 Here's how it works: You get a pair

of specially-made brackets that mount to the the tailpiece. One mounts to the front, and one mounts to the back. (For most applications, you'll use either one or the other, not both at the same time.) The brackets have one or two threaded mounting points, upon which you can screw on a microphone clip or a gooseneck. For a huge variety of mounting positions, you can mount the mic clip right to the clamp, or add on one of two included goosenecks (6-inch and 12-inch) to accommodate whatever type of mic'ing you would prefer. All of the most common mic positions are supported by this flexibility.

centered rear-mount post which is perfect for placing the mic under the bridge. The

optional front-mount bracket features a centered mount point for placing the mic above the bridge.

Also new for 2019, the bracket is mounted using much nicer, lightweight custom-manufactured low-profile bolts, with lighter and smaller thumb-nuts for easier installation.

The various photos below illustrate several (but nowhere near ALL) available mounting options, using the goosenecks, as well as direct-mounting the clip. Obviously, the goosenecks are flexible and can be moved around to place the mic where you want it. 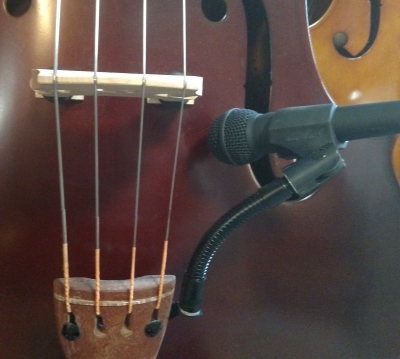 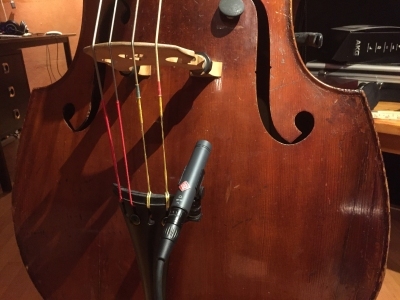 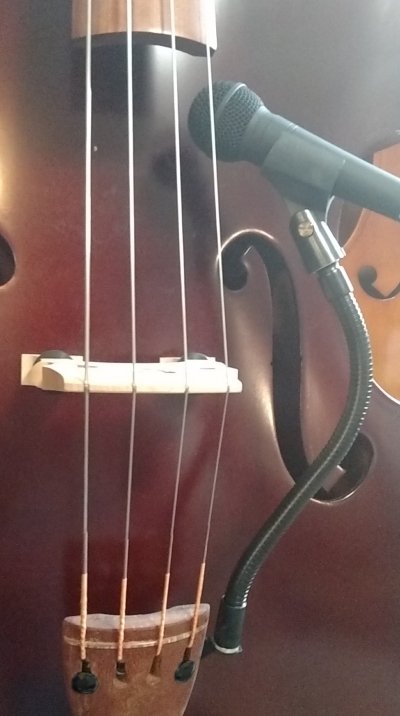 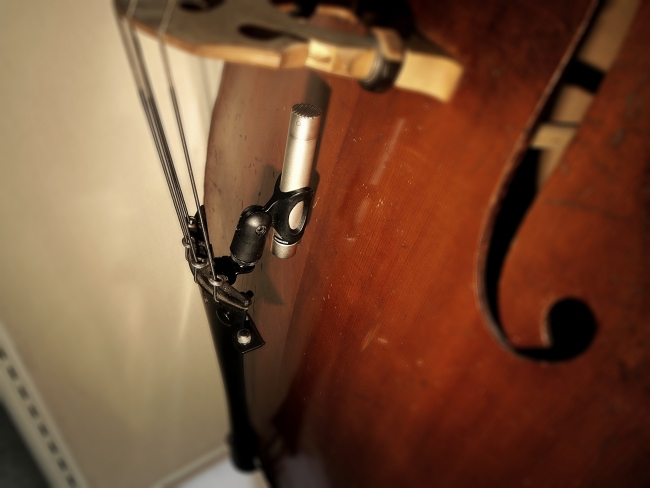 The unit is simple to use, reasonably lightweight*, and mounts easily with no tools or modification on typical "tulip" style straight tailpieces (like you'd commonly find on a Kay or Engelhardt, as the ones in the photos.) It is a less expensive alternative to a higher-tech unit like the H-Clamp (which we also sell) and a more reliable, less "hack" option than dropping a SM-57 in a sock and wedging it behind the tailpiece.

In our exclusive package, you get: 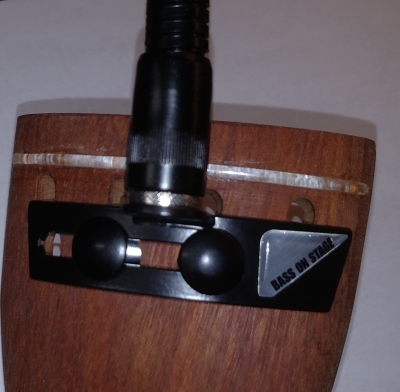 The goosenecks and the adapter use a standard 5/8" BSW mic stand thread, so you may use most any common mic clip/cradle/holder, as needed for your application.

Join our newsletter
We send occasional correspondence from Gollihur Music. Yes, some of it is promotional, to tell you about new products, special offers, and the like -- but it's also informative, with lesson materials, technical help, tips and tricks, and more.