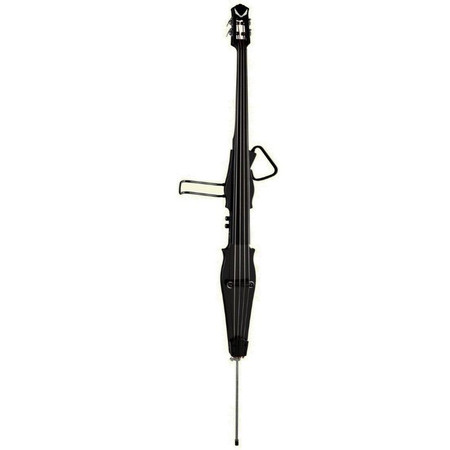 I wasn't a huge proponent of the original Dean Pace bass; while it's fun to noodle around on, it's a very short scale with a flat fingerboard; it's essentially a true "FEBGOAS" (Fretless Electric Bass Guitar On A Stick -- a term that Bob coined long ago.) So imagine my surprise when I discovered that Dean has since unveiled a more authentically designed electric upright -- one which...

Hey, this thing is pretty nifty!


How does it play?

Not bad at all! It's set up like a real upright, which a familiar scale and curved board. An adjustable bridge allows for easy tweaking, and the neck has a truss rod for putting a bit of "scoop" in the neck if needed. The removable bout allows you to address the instrument in a fairly authentic way, letting your body "hold" the bass to some degree - though its slim build does allow it to rotate a bit (it uses a standard endpin, not a non-rotational one.) Height is fully adjustable, just like on a real bass, with an extendable endpin -- and it even has a rubber cap covering a point, so you could even "stake in" on a stage (though you'd better ask first!)

How does it sound?

Like any other solid-body EUB, it lacks the "body" of not having the huge cavity of a "real" upright bass. But it does have a satisfyingly "thick" tone; it's not too spanky or bright. The unusual lone "Bass" tone knob allows for boosting/cutting bass only, so I guess you're meant to tailor the bass response around the rest of the tonal spectrum, which is apparently fixed. The bass has a darker sound, to my ears -- could be the strings, could be the pickup, which is built into the bridge. But, also like the other EUBs out there, the more you play it like an upright (getting the string to bloom with the meaty edge of your finger, like you're supposed to) the more it sounds like one.

How does it look?

Like many solid-body electric uprights, there are "cues" which sort of echo the look of an upright, but with modern refinements; some shallow C-bouts give it some character. So it's not going to "fool" anyone, looks-wise, but they'll get the connection to the upright. And, like Henry Ford used to say about the Model A, you can have the bass painted in any color, as long as it's black.

The bass comes with a full set of accessories:

Very often I speak to folks who want an electric upright bass for practice, toting to rehearsals, or dorm room usage. Until this bass became available, the "entry level" bass that I'm comfortable recommending was $1500 and up. Now the Dean Pace Contra comes in, and it's less than half the price. And while I still think that those $1500 basses are better in fit and finish, the Dean is considerably better than half as good, to be sure!

Dean Guitars are warranted to be free from defects in material and workmanship from the date of purchase to the original purchaser when purchased from an authorized Dean dealer. Dean will repair or replace, at its option, any Dean instrument or part thereof which is found by Dean to be defective. Dean reserves the right to use materials regularly utilized at the time of repair in the event that original materials are no longer available. Warranty service requires a copy of the original sales receipt to be presented at time of service request.

FREE SHIPPING:
To Continental US (Lower 48)
FREE GIFT(S) with purchase:
Add to cart to reveal!

MSRP:
Our Low Price: Special Price: $134.99
Regular Price
For a long time, we've fielded requests for "a stand that will work with my Electric Upright Bass." The Ingles SA22 we've had for years will work with some of the EUBs -- as long as they have at...

MSRP:
Our Low Price: Special Price: $89.00
Regular Price
The Eminence Bass Stand is available separately for current Eminence electric upright bass owners. It is made by Hamilton, but has a custom receiver at the base, specifically designed to accept the...

MSRP:
Our Low Price: Special Price: $102.00 - $151.00
Regular Price
The NS Electric line was developed as a joint effort between Ned Steinberger and D'Addario Strings. Because volume is unlimited for electric instruments, NS Electric line focuses on tone and...

FREE SHIPPING:
To Continental US (Lower 48)
FREE GIFT(S) with purchase:
Add to cart to reveal!

MSRP:
Our Low Price: Special Price: $1,899.00
Regular Price
Ned Steinberger created his electric upright bass many years ago, and the lower-cost NXT has been a excellent option for those with more modest budgets -- but he never truly intended for it to be a...

MSRP:
Our Low Price: Special Price: $179.00
Regular Price
We've had a lot of requests for a case for the NS Design basses; even though NS Design does make an ATA-Rated flight case (originally for their CR model line, it also fits the WAV4 and NXT), it...