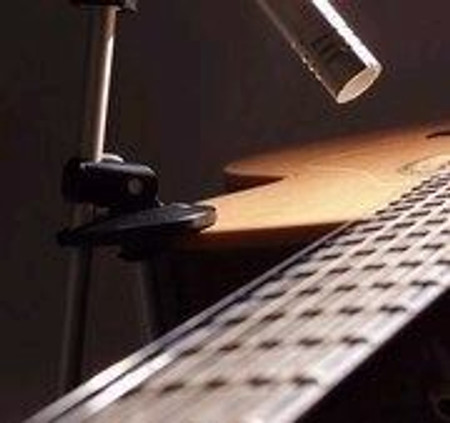 It obviously depends on the music and the venue -- but nothing sounds more real, when amplifying or recording guitar, than a microphone. Acoustic pickups are, essentially, a compromise - developed for situations when a microphone isn't practical due to feedback and bleed-through issues. In the studio, particularly, microphones are the way to go - but it's so hard to keep the guitar still so that the mic stays in the "sweet spot" and gives you a consistent sound.

The H-Clamp is a very sophisticated adjustable instrument microphone mounting device, with models available for Guitar, Upright Bass, and Cello, all of which may be suitable for other, similarly sized acoustic instruments (review size specifications here or elsewhere on the site to compare to your instrument).

This clever, well-made unit uses a clamp that echoes the design of the traditional luthier's edge clamp (cramp). This anchors the microphone firmly in place using the edge of the instrument as the contact point, to avoid dampening the instrument's natural vibrations. You can use just about any mic (while lighter is better, the manual offers suggestions for safely using larger/heavier mics) be it large or small diaphragm, condenser or dynamic -- the H-Clamp is compatible with any standard mic clip or suspension mount. The maneuverability of both the clamp and arm allows virtually any preferred placement, as well as the ability to locate it so as not to interfere with the player's motions.

The "space age" construction materials result in an extremely light yet secure mount. The top-of-the-line "Black" model uses an aerospace polymer, a high tech material developed to be machined instead of moulded, for the clamp discs -- it's as strong as aluminium but lighter and essentially inert acoustically. The shaft, boom and screws are all aerospace grade aluminium. Silicone and other material inserts and sleeves are used for all the contact points to avoid damage to your instrument, and, presumably, to minimize vibration.

A very thorough Manual is included. It offers instrument-specific, detailed recommendations as well as general information. 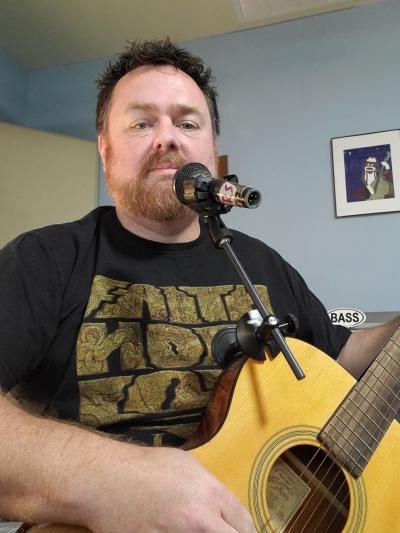 Can I use it to hold a vocal mic?

I had a customer ask me if they could use the mic for a singer-songwriter sort of arrangement, where the clamp would hold a mic for vocals. It's not its intended purpose, obviously, but as you can see from the photo to the right, it's totally possible! In looking at the photo, I should have turned the boom around so that it would have the "slot" on the front clamp on top, which would both allow the boom to come fully toward my mouth and provided better clamping "purchase" on the guitar, but it worked like this nonetheless. So, yeah - not its intended design spec, but it can work!

There are several models offered by the manufacturer, but for guitars and other non-bass instruments, we offer the standard "Light Guitar" model and the (self-dubbed) "Pro Studio" H-Clamp.

The Guitar Model is called the "LiveGuitar Light" and has an adjustment range of 84mm to 116mm to fit the bodies of guitars from classical to dreadnought. Like the others, it is manufactured from aircraft grade polymers and alloys to minimise its weight without compromising its strength. Weighing only around 135g, the LiveGuitar H-clamp Light makes little or no discernable difference to the weight or balance of a guitar unless used with heavy microphones. When folded away, it is small and light enough to fit in the zip pockets of most carrying bags and can safely be transported in a kit bag along with other stage and studio equipment. Despite its low weight, the robust design and high tech materials ensure it can withstand years of battering in a musician's kit bag and still work perfectly every time.

The "Studio Plus" Model: Exploraudio calls it the "Multi-Instrument Mount." This is the "DELUXE" unit, which includes FOUR different sized shafts, which -- by mixing and matching -- allow you incredibly flexible width of space between the clamps. The LiveMount Standard Muti-instrument H-clamp model has a seamless adjustment range of 43mm to 278mm. Various combinations of the shafts allow you to use this model for almost any mic-able instrument: Regular Sized Upright Basses, OVERsized Upright Basses, Cellos, Standard-depth, "Baby" and Oversized Acoustic Guitars, Mandolins, Ukuleles, Small Combo Amps, and just about everything else in-between. This model therefore covers all the applications for which the H-clamp was designed.

This top-of-the-line model features the ultra-lightweight composite disc components, and it is fully anodized in a matte black finish for a subtle appearance. This special product (the "Pro Studio" designation is ours, not ExplorAudio's) is perfect for a musician with a home studio, or for the gig-bag of a live soundman for mic-ing just about anyone on the stage.

Mark uses one of the "Pro Studio" clamps himself, in his home studio.

One of the photos shows an H-Clamp off the guitar so that you can get an idea of the construction and design of the unit; note that some of the images on the page may show microphones and shock mount holders, but they are shown for display purposes only. The product offered is the H-Clamp only, no microphone or shock-mount is included.

The mic mounting shaft has a standard 3/8" BSW thread which is common in Europe, and a screw-on adaptor for the common 5/8 BSW mic stand thread (used in America) is included. You may use most any common mic holder, as needed.

The warranty provided with Exploraudio's products is a minimum of 1 year from date of purchase but many products are supplied with longer warranties. The conditions of any extended warranties are described on the warranty card supplied with the product.

Exploraudio does not accept responsibility for any costs incurred in returning product for repair, exchange or refund, whether or not it is returned within the warranty period.

Exploraudio accepts no responsibility for any items used in conjunction with products supplied by Exploraudio. If you experience any problems when using Exploraudio products in accordance with the instructions provided, please contact the manufacturer.
View AllClose

MSRP:
Our Low Price: Special Price: $549.00
Regular Price
The Ehrlund Acoustic Pickup (EAP) is a linear microphone for acoustic instruments. We emphasize the term "linear microphone" because this is what Göran Ehrlund (inventor and manufacturer of...

MSRP:
Our Low Price: Special Price: $999.00
Regular Price
Ehrlund Studio Microphones We are one of the only US-based retailers carrying the Ehrlund EAP surface mic, which is an excellent choice for amplifying the double bass (and many other stringed...

MSRP:
Our Low Price: Special Price: $16.50
Regular Price
This standard 20-foot mic cable is nicely flexible - and well-made! It's an affordable, and trouble-free, Microphone Cable. Includes a manufacturer's guarantee against defect.Uses for the Upright...