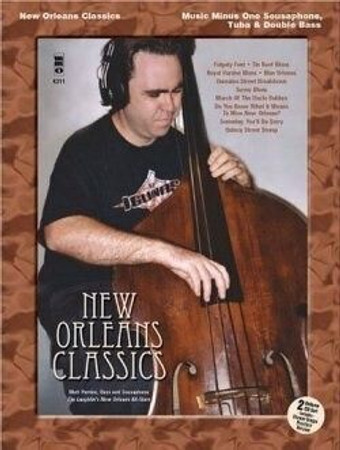 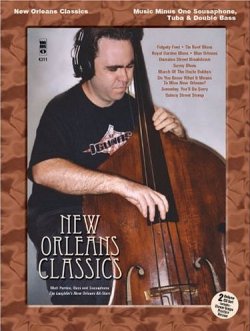 Many people consider New Orleans the birthplace of jazz. After all, Louis Armstrong was born and played there, as well as Joseph "King" Oliver, the Dodds Brothers, Sidney Bechet and a roster of players to fill not one, but many all-star bands. Louis Prima was a ‘child of the Crescent City’ as is Harry Connick and Wynton Marsalis. The whole Marsalis clan was raised there, and are all acknowledged ‘jazz masters,’ so its reputation as the seminal jazz town has long been acknowledged.

Music Minus One has assembled a band of New Orleans’ best players for our times, veterans all of many street parades and steamboat gigs, and asked them to put together a typical program of New Orleans Classics. Under the direction of Tim Laughlin, clarinetist supreme, and led by Connie Jones, Jr., one of the great hornmen of this city which boasts so many great players... they put together an album of must-hear, must-have songs that every traditional jazz player cherishes.

Hear them now in these perfect renditions. Then join the band on your own bass as they swing through the French Quarter of New Orleans. Listen to New Orleans' own Matt Perrine play bass and Sousaphone with the band; then it's YOUR turn!

Includes: newly engraved solo charts printed on acid-free, ivory paper; a compact disc featuring complete versions of each tune featuring Matt Perrine, plus a recording of the accompaniments minus the soloist; a second compact disc with slow-tempo versions of most up-tempo pieces for practice purposes.

*(Notation is for String Bass - Tuba will need to transpose the octave down).

MSRP:
Our Low Price: Special Price: $16.99
Regular Price
A Play-Along book/CD set can be a great way to practice and learn the popular songs of your favorite genre. This set features the songs of Count Basie, and features 10 arrangements that you'll be...

MSRP:
Our Low Price: Special Price: $19.95
Regular Price
Ok, tutorials and lesson books are fine, but sometimes you just want to play with the band! This book helps you to learn the tunes, and the Downloadable CD gives you the musicians to play with!...

MSRP:
Our Low Price: Special Price: $24.95
Regular Price
With a 64-page book chock full of charts, performance notes, rare photos and more, this book gets the essential Mingus into your hands. And the (included) pair of Downloadable CDs, featuring...

MSRP:
Our Low Price: Special Price: $19.95
Regular Price
Ron Carter is a master at the jazz bass, and has played and recorded with many of the all-time greats of jazz. He's also an in-demand session player and an author of several books on bass technique...

MSRP:
Our Low Price: Special Price: $14.95
Regular Price
Essential Scales, Patterns and ExercisesLegendary, prolific jazz bassist -- and teacher -- Ray Brown reveals his lessons and teaching philosophy in this book. Not really a "beginner's" book, it is a...

MSRP:
Our Low Price: Special Price: $24.97
Regular Price
If you ask, I will always suggest that you start your upright bass adventures by studying with an experienced and schooled teacher. However, I recognize that both geography and cost can get in the...

MSRP:
Our Low Price: Special Price: $41.95
Regular Price
Enjoy the Double Bass, Vol 1 & 2Double Bass Method with Piano Accompaniment Book/CDThis method for learning upright bass has some similarities to the Simandl exercises, but has some guidance for...