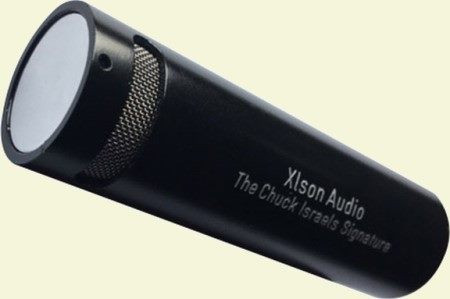 My dad (Bob) and I have become well-known for our "frugality" (okay, I admit it, sometimes I'm cheap). And a lot of the gear we offer on the site is geared towards the hobbyist player on a budget - the guy (or gal) who doesn't have a lot of extra nickels to rub together. We try to offer some real, useful, good-sounding amplification options on a budget.

And then, there's the top-shelf stuff. The super-nice studio-grade preamps from boutique brands; the high-end amplifiers and speakers; the contact pickups and nifty "tone toys" that can really make a difference.

This microphone specifically engineered for double bass (new in May 2018) is one of those second things. By no means is it a cheap mic - once you factor in the Euro-to-Dollar conversion, it ends up a fair bit north of $1k. But the early word on this is very strong; folks who've tried it already are stunned by its clear, natural sound - as well as its strong levels of volume/gain without undue feedback issues or crosstalk from other instruments. Players have reported a unique response characteristic of playing with the mic; one that retains the "acoustic" feel of playing and doesn't take away the natural response that encourages you to play.

"Peter Axelsson has developed a mic that rejects enough extraneous sound that it is practical to use in live situations and in recordings with little to no isolation baffling. The quality is excellent and I can amplify the bass even louder than I need it." - Chuck Israels

And, of course, the well-known and highly respected bassist Chuck Israels is stamping his name on the mic - it was designed for and with him, and it is his signature mic. And he's clearly loving getting the studio sound live on stage, without worrying about using baffles, or fighting feedback.

Small, solid, and really beautifully crafted, this mic was designed by Peter Axelsson, and developed in close collaboration with hi-end microphone manufacturer Pearl Microphone Lab in Sweden. Gollihur Music is proud to be one of a very select handful of retailers authorized to directly acquire and sell these microphones.

So what makes it so special?

Certainly, there are already some popular and well-used microphones out there for the purpose of amplifying the double bass, as well as loads of general-purpose mics that work well for capturing the bass for recording situations in the studio. On stage, the limits of the acoustic microphone are set by its ability to suppress acoustic feedback. The bass player often has to lower the level of a mic, whether running solo or blending with a pickup, to a level where it almost doesn’t matter if it is in use or not. At the very least, one might need to channel it through the PA system to mitigate feedback issues. But even then, the acoustic bass microphone can be subject to picking up other instruments on stage, disturbing the clarity of the mix.

Likewise, in the studio, a high-end mic can sound amazing, capturing the whole sound of the bass beautifully. But in most recording situations, you will have to hide the bass player behind baffles to block the leakage from other instruments in order to have a bass track that is possible to use – and even then, the sound from the band can be significant in the bass microphone.

So Peter Axelsson set out to create a mic that could effectively capture that wonderful studio sound, while providing the best protection against feedback and leakage possible. Did he do it? The proof is in the pudding. What he ended up with is a microphone that is ideal as a blending -- or stand-alone -- microphone for amplifying your bass on the stage. It offers a great, natural bass sound that is far easier to control and handle in the mix.

Look, if that's not the "holy grail" that most are seeking, of MBOL (My Bass, Only Louder), then I don't know what is.

Well, no. All acoustic microphones feed back at higher volume and under certain conditions; this microphone isn't made with fairy dust. But it is better-protected against feedback issues by virtue of its design; and if you can get a volume that makes the microphone work as intended, without feedback, then you're golden. And that's the idea. So, to reduce it, they tried to put the feed back in a high frequency range where it doesn’t blur the low and midrange. Also the distance from the bass top is important. Too much distance, and you will lose effective signal, and it will feed back because you will have to raise the volume too much. Too little distance, and you will have a resonance between the top and the microphone body. And the "side-address" design (look at the photo to the right - the mic element in the photo is pointed directly at the bass top) helps easily direct the mic to the body while having a low-profile that makes it less likely you'll bump the mic.

What makes the mic bass-specific?

The Chuck Israels Signature Mic has a frequency response adjusted to the frequency range of the double bass. Looking at the bass tracks in recordings, there is almost nothing above 5-6000 Hz, and the microphone is adjusted to complement that range. Also, the microphone is made to reduce/avoid the proximity effect that appears when you place a microphone close to the sound source.

This is a condenser microphone, so it requires 48v phantom power to operate at its best. However, the mic has been effectively tested on the Gollihur Series upright bass amp (from Genzler Amplification) which operates on 12v phantom power, so be aware that other options exist. A high-quality microphone preamp is recommended, and we have lots - like the FELiX from Grace Design, the Acoustic Image FLEX, and others. See the "Related Products," below, for some other options.

So, enough of the talky-talk, here's the bullet points...

We offer this great mic in several packages; together with a couple different mic-mounting brackets/booms, as well as some useful preamp options. Since there are a ton of different options you could go with, though, contact us if you'd like to bundle it with a different combination of gear, and we'll create a custom package for you.
View AllClose

MSRP:
Our Low Price: Special Price: $160.00
Regular Price
K&K's various bass transducers can deliver an exceptionally warm and natural sound -- but there are times when a microphone can add extra warmth and life to your signal, or perhaps be the total...

MSRP:
Our Low Price: Special Price: $174.00
Regular Price
Great Value? You bet!This screencap from early 2003 shows our product page for these same bows -- 19 years ago, we sold them

MSRP:
Our Low Price: Special Price: $20.99
Regular Price
For the advanced bassist, this set of eight solo bass pieces provides a curated collection of the most beautiful Russian pieces for double bass and piano. Including pieces by Tchaikovsky, Glière,...

MSRP:
Our Low Price: Special Price: $135.00
Regular Price
It obviously depends on the music and the venue -- but nothing sounds more natural, when amplifying or recording your bass, than a microphone. Upright Bass pickups were, essentially, a compromise -...

MSRP:
Our Low Price: Special Price: $619.95
Regular Price
Now with CORE by DPA technologyThe d:vote™ CORE (released in 2018) version is now what we have in stock. (If you're price-matching, make sure that the "great deal" you found is for...