Some of our Brands

We've been proud to be the leading proponent (and seller) of the Acoustic Image amps for well over 20 years - including the venerable Coda and Contra combo amps, which are still in use by thousands of players around the world. The revolutionary design of their speaker cabinets helped to revolutionize acoustic instrument amplification for the last two decades.

The Coda has long been a down-firing (speaker faces the floor) design, which creates a very noticeable "room-filling" effect. The sound seems to be coming from everywhere, making for a vibe that doesn't sound like you're playing through an amp, but rather that your bass is loud enough to fill the room by itself. We like that. And a lot of other players do, too.

The original amps were made of wood-based structural materials, which were carpeted. A few years later, they moved to a design that incorporated injection-molded structural foam, which was lighter. Which each new "Series" (Series II, Series III, Series 4, Series 4+) the great folks at AI continue to change the game, making lighter, smaller, more powerful amps.

And that brings us to this:

With the success and rave reviews of the newest Acoustic Image products, the Upshot and the Doubleshot, AI have
replaced the molded cabinet design of the Coda with a spiral-wound rigid paper tube. This has resulted in smaller, lighter and better sounding speaker cabinets.

Additionally, the "modular" design of the Upshot and Doubleshot - using an interchangeable "head" which mounts to the speaker cabinet, forming a "combo" without requiring a dedicated, permanent setup - has been brought to the Coda amp lineup as well. This design ethic makes for a flexibility that is unmatched by most other amps on the market. You can choose between the 4 different head models offered by Acoustic Image, or even bring your own amp head to the party. And it makes for an eminently portable rig as well.

This product, therefore, replaces the Contra, Coda and Corus products from the previous generation. The new Coda is a 1x10 plus 1x5 cabinet like its predecessors except it has an upfiring woofer. The resulting speaker cabinet has a more forward and omnidirectional sound than the previous cabinets. It has the warmth and punch of the Contra and Coda plus the more forward sound of the Corus.

As mentioned above, with the addition of a mounting bracket, the new Coda cabinet becomes a combo amp with a removable head. The bracket allows the head to remain attached for performance and transport (when the head is in the docked position) and is removable to allow the head to be used in different performing situations.

The Coda speaker cabinet is 12-inch diameter by 10 inches high, spiral-wound cabinet with an upfiring 10-inch woofer and a side-firing 5-inch midrange. It is noticeably smaller than the earlier generation molded cabs and it weighs 13 pounds (5 pounds lighter than the molded cabinet). The upfiring driver gives the Coda a more forward sound while still retaining the warmth and punch of its predecessors.

With the addition of a mounting bracket, the Coda cabinet becomes a versatile combo amp to which any of our four existing amp heads can be attached.

Add a Clarus SL series head to the Coda Speaker to create a combo! 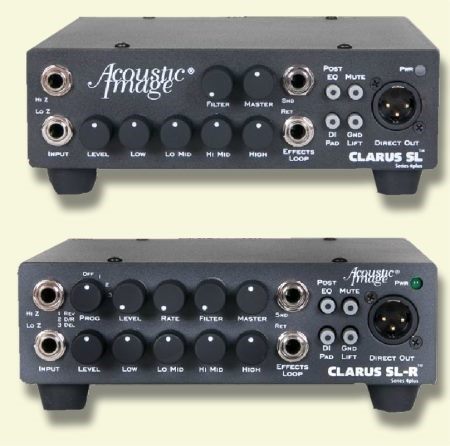 "Combos" are created by placing any of the Acoustic Image Clarus SL series heads atop the speaker, using a special grill-mounted bracket to secure it - and a Speakon speaker cable is included for connection.

The SL version heads (also available separately) are a smaller and lighter version of the classic Clarus amplifier. All three provide the same 650w power amp that is found in the larger Clarus head, and they are all capable of handling a 2ohm minimum speaker impedance. They are offered in three versions:

A perfect match of tone and amplifier power, Acoustic Image combo rigs are formidible, eminently portable, and respected worldwide for their transparency and tone. And this one is the new culmination of all of their development and experience over the last two decades.

14 Day Trial Period on Series 4 Acoustic Image amps and speaker cabinetsNew owners have a fourteen day trial period during which they may return the amp in new condition -- NO QUESTIONS ASKED! -- for a full refund, minus our outgoing shipping cost and a small transaction fee to cover credit card or PayPal payment processing. Returns must be preauthorized; a restocking fee applies if the unit is not returned in new condition.

Submit Your Own Product Review