Some of our Brands

It's the UpShot cabinet from Acoustic Image!

We've been partners with Acoustic Image since the beginning; we've been carrying their groundbreaking, well-engineered, and giggable products since the first generation of the Contra amp almost 2 decades ago. Their unique cylindrical cabinets, downfiring woofers, and transparent amp designs have become a gold standard for acoustic amplification (and remained as one for quite some time), and we're proud to be associated with such a boutique-level product line. We've even helped with product development ideas and testing of prototypes over the years.

This new speaker from Acoustic Image is their tiniest yet! Outstanding for onstage self-monitoring, it's also great for small venue gigs. At under 6 inches tall, and only 11" in diameter, it's almost unbelievably tiny. And it's a high-wattage, full-sized speaker in there - but the whole shebang is under 12 lbs! It's a "real" speaker cabinet you can legitimately carry in a small tote bag with one hand! 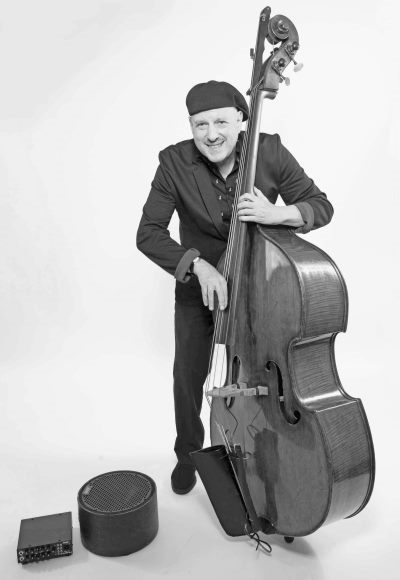 In fact, that was sort of the genesis of the amp's design and creation. Storied New York bassist Harvie S is a partner player of Acoustic Image amps, and he specifically asked for a speaker that he could carry in a backpack. Rick, while skeptical at first, figured he'd give it a go -- he's not one to shy away from a challenge. Once he solved the technical issues with the resonance that such a powerful speaker in such a small cabinet can produce, he realized that the speaker actually sounds great; the same well-loved driver that is in their other popular cabinets sounds great in this tiny little cylinder, too!

So the folks at Acoustic Image have taken to calling the UpShot the "Harvie S Signature Model."

As the inspiration for this little guy, Harvie S tested his prototype in various venues in NYC and has concluded "The speaker is changing the whole way a bass player lives. I'm on my first gig with it and everyone loves the sound of it. I walked in just carried it like I was carrying a small briefcase. This thing is so great."

And after a gig at the Kitano in NYC, he sent this note: "I played a trio gig last night at the Kitano. I used the [UpShot] and everyone said it was the best bass sound they ever heard in that room. Most people thought that I didn't have an amp but they could hear the bass perfect(ly)."

He has shown the UpShot to guitar players and keyboard players and they all want one of their own.

We put one through its paces here at the shop, and it's impressive. The UpShot is designed to be placed on the floor, close by, so that the player can clearly hear his or her instrument. The omnidirectional nature of the sound resulting from the driver being close to the floor, allows the instrument to be clearly heard on the bandstand and throughout the club.

The cabinet works great with an equally tiny Clarus SL or Clarus model, and as an 8ohm cabinet, could also easily be used as an extension to your existing Acoustic Image combo; put your main amp out front for the audience, and have a new "drop" monitor for your instrument right in front of you!

We also played acoustic guitar through it, and it sounds spectacular for that as well. We didn't get a chance to play keys through it yet, but some of Harvie's friends have, and they've already placed their orders.

The package is now offered as a "combo" which pairs the Upshot with one of the three Clarus SL amps, and gets you everything in one price; items can also be purchased separately if you already have an amp head you like, or bought an Upshot already and want to "convert" to a combo.

The combo is created by mounting the amp to a unique sliding bracket that is attached to the UpShot speaker. The unit can be transported in the “docked” position. When ready for use, the amp is put in the “deployed” position by loosening a thumbscrew, sliding the bracket into position and raising the head for connection.

The bracket mounts on the rear of the cabinet, just over the input jack. A cutout in the bracket straddles the input connector for stable mounting.

Harvie S said he wanted the speaker to fit in a backpack, and for a while one was available for purchase (Acoustic Image had one made especially for the amp rig). However, they are no longer available from Acoustic Image, and existing gig bags (for other instruments) from other makers serve the purpose well for a lot less money. We'll be updating this page with some of those options shortly, for adding to your cart.

New owners have a fourteen day trial period during which they may return the amp in new condition -- NO QUESTIONS ASKED! -- for a full refund, minus our outgoing shipping cost and a small transaction fee to cover credit card or PayPal payment processing. Returns must be preauthorized; a restocking fee applies if the unit is not returned in new condition.

We stand behind our products with a full warranty of five years from the date of purchase. Speaker components are warranted for 180 days. Should a problem arise, please call us before returning your amplifier or enclosure. Naturally, our warranty does not cover products that have been damaged through misuse.

FREE SHIPPING To Continental US (Lower 48)

Submit Your Own Product Review