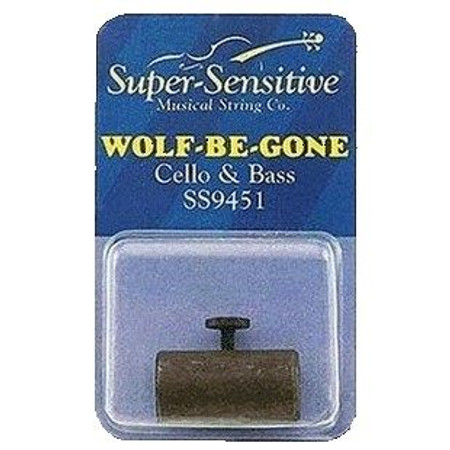 You've probably heard the term "wolf tone" from your bassist or other stringed instrument friends. It's a commonly misunderstood concept, but not a rarity on bowed stringed instruments (and is particularly common with carved instruments). There are various methods of "eliminating" or "moving" (changing the affected pitch) wolf tones. A simple eliminator like this one is a simple, inexpensive and common solution.

Put simply, it's an artificial overtone. It occurs because your bass has a frequency at which - due to its physical size - it naturally over-resonates. It's kind of like a drum having a particular tuning at which it sounds best (which is fine for drums, but we bassists have many different notes to play on the same instrument!) On a bass, when you play the note that is of that same resonating frequency (or very close to it), you get a sustained overtone along with the pitch of the string being played. This can cause a note that "jumps out" more than other notes, as well as cause that "beating" sound you hear when you play the same note on two strings that aren't quite in tune with each other.

It's probably called a "Wolf Tone" since that "beating" can be reminiscent of the howling of that animal. Since basses generally have fairly similar sizes, the wolf tone (when found) on a bass is often around "G."

You don't really get rid of it, but you can often reduce or slightly "shift" the wolf tone. You can add a wolf tone suppressor, like the one on this page, to the afterlength (the part of the string between the bridge and tailpiece) on the string upon which the wolf tone is most obviously present. By moving the weight up and down, you may be able to "dial in" that wolf tone's frequency and reduce its effects - it's sort of a "mini-attenuator" which can often decrease the intensity of that frequency. It may also cause the wolf tone to "shift," preferably to a tone "between notes" where it won't do any harm. It's a common solution to a common problem; wolf-tone eliminators have long been available for all members of the string family.

The ones we offer consist of a rubber sleeve, which is surrounded by a weighted collar with a set screw. To install, you simply remove the rubber sleeve, place it on the string, put the metal collar around it, and tighten the thumbscrew. You don't need to remove or detune the strings to install it - it takes only moments to install, move, or remove. No tools necessary.

This "eliminator" by SuperSensitive has a black finish and weighs approximately 11-12 grams.

MSRP:
Our Low Price: Special Price: $152.00
Regular Price
These strings have been made for decades; they have a nylon core, which is flatwound with nylon on the G and D strings, and with monel (a nickel alloy) on the A and E strings. The strings have a...

To Make a Double Bass - Book by H.S.Wake

MSRP:
Our Low Price: Special Price: $45.00
Regular Price
Harry Wake, a longtime professional cellist and engineer, originally self-published this book in 1982 -- and then revised it in 1995. Whenever someone on the online forums pipes up "where can I get...

Folding Stand for Double Bass by On Stage

MSRP:
Our Low Price: Special Price: $84.95
Regular Price
Upright Bass Stand -one of the most stable stands you'll find!For years I reluctantly used my old bass stand - the old Hamilton stand that had the little "cup" you had to aim for (and often missed on...

MSRP:
Our Low Price: Special Price: $49.95
Regular Price
This really nicely made mute is a relatively new product, developed and hand-crafted by Nino Ocampo in the USA. Thanks to the creative spark of Nino, who is a bassist himself, we now have a wonderful...

MSRP:
Our Low Price: Special Price: $49.95
Regular Price
This really nicely made mute is a relatively new product, developed and hand-crafted by Nino Ocampo in the USA. Thanks to the creative spark of Nino, who is a bassist himself, we now have a wonderful...