Is an Electric Upright Bass "Good Enough" If I Want to Learn Upright?

Folks often ask if it's "okay" to get an electric upright bass to begin their studies - though they intend to get a "real" bass someday, right now, such a large investment in such a large instrument isn't practical for them. And lots of other musicians have told them that getting such an instrument is "wrong" for... reasons. 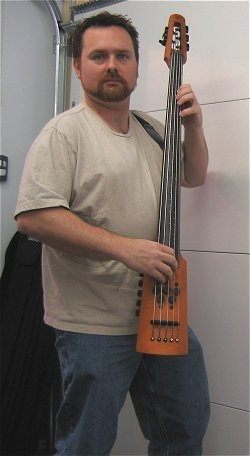 You'll find that there are a LOT of people with opinions. If someone's opinion discourages you from playing, whether it be a "legitimate" upright bass, a solid-body electric upright, or something else entirely - because it's not practical, or the "right" instrument - I say that their opinion isn't worth your consideration.

If playing a full-bodied upright bass isn't practical for you for now, for size, financial, or other reasons, and you find yourself drawn to play something else in the meantime, then by all means, play something else in the meantime. Now, to be fair, we must admit that playing an electric upright isn't exactly like playing a full-bodied bass (though some can come reasonably close) but that's okay. It's probably close enough, and...

...If you're making music, then you're doing it right.

Yes, there are some practical concerns to using an electric upright as a substitute for a full acoustic upright, but most of them have to do with tone, certain techniques (like thumb position), or the proper way to address (stand with) the instrument. These are things that can be learned later, though. The bottom line is: if you're playing the bass NOW instead of putting it off, you're gaining ground instead of standing still.

If, down the road, you transition to a "real" upright, then the experience and other things you've been doing will (mostly) translate to the new instrument. But even if you never do manage to get a full size upright, you'll at least have been playing, rather than having heeded the advice from some loudmouth on the internet who told that you shouldn't play an electric upright because it's not "authentic" enough.

Back To: Knowledge Base (FAQs)