There are a ton of string choices on our site; it can be overwhelming! If you're looking for a change, how do you know what to choose?  If you primarily play in an orchestra using a bow, which strings are better suited for bowing, and which are not?

We've assembled a short list of some more popular choices for arco-style play (they all also can be played pizzicato as well!) so that you can see and compare several options on one page.

You can read the short descriptions here, and purchase the set by clicking the link to the main product. You can also learn more about a specific set you're interested in by clicking its link - this may also provide other options, like different gauges or solo-tuning sets, five-string or extended E-string options, and more.

Compared to the original Flexocor Strings, which have a reputation for being a bit "brash," these strings are a little more tempered to no be so harsh under the bow. With a steel core, pitch stability is of little concern; they'll be (and stay) up to pitch consistently with less of the "stretching in" time that synthetic-cored hybrid strings usually require. They also have less "roll" under the plucking fingers than a nylon core (Obligatos are famous for this). And the steel core makes them long-lasting, as well. Digging in for a solo passage, you can really bring out a clear, detailed tone - but with a more relaxed hand, big arco warmth is right under your fingers. It's kind of like getting "The Best of the Flex." 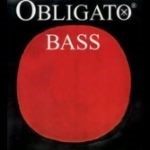 Pirastro's popular Obligato strings have a solid synthetic core with a very thin metal wrap. They were designed to emulate gut strings, and their very smooth surface is kind to the fingers and they are a dream to bow. I am very fond of how well they emulate gut and the traditional bass sound, yet without mud or imprecision. They may look like metal strings, but they sure don't feel or sound like them-- the thin coating fools you! 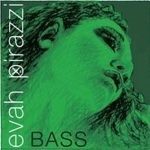 The Evah Pirazzi bass strings have a core made from a new synthetic fiber that Pirastro recently developed, wound with a polished chrome steel. Their sound is akin to Pirastro's popular Obligato strings, but they also have marked differences. They have less sustain than most metal-core strings; their arco response is warm and full. With their big sound, they can practically shake the room when you bow a low E -- very satisfying! They have plenty of "grab" for the bow and that "just right" tone for arco: full and complex, not scratchy at all. They're also a different feel from the Obligatos; they have a beefier tension, with less "roll" (a lateral twisting when you're playing, particularly pizz). However, most players report that the "tightness" or "stiffness" is reduced as the strings break in - sonically, they really start to bloom, and even begin to growl a bit better, once you've been playing on them for a couple weeks.

The Kaplan Strings have a big, warm response, plenty of dynamic range, and great bowability. They were created to provide a rich tone, variable dynamics, and excellent bowing response. They are clear, yet warm in their tonal color - regardless of what register you're playing in. The strings reportedly have a fast response, and a "soft" feel both under the left hand and under the bow - making them an "easier" playing string. Yet they have a great range of dynamics and sound - you can really get them projecting loudly, without having the note distort out of tune. 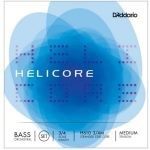 The Orchestra strings are very bowable, and are designed for less sustain, since orchestral players are not looking for the same level of sustain that a jazz pizzicato performer would want. They are quite easy under the bow, and an excellent budget-friendly choice for students and orchestra players alike! 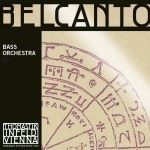 Thomastik has been making these "rope core" (a style of winding, not what they're made of!) strings for a couple of years. They were primarily designed for bowed work, so their bowed feel and quick response and soft feel is wonderful. Their tone is dark and warm with excellent resonance and a wide range of tone colors; they feature outstanding projection with moderate effort. But they also have a very musical, warm pizz sound with a very sweet sustain. Also available in Solo Tuning! 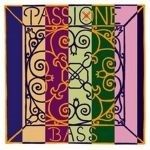 Pirastro released these steel rope-core strings in 2010, and they are tailor-made for orchestral players. Where they really shine is with big, projecting sound. They have a nice clarity, with a full, rich tone, and they're quite easy to bow. Round and warm, they have a complex overtone spectrum which results in a deep sound with great projection and power. Notes are separate and distinctively clean when played in fast passages. No matter whether playing Spiccato or Legato, the sound can be altered as desired independently from the bowing speed. The big advantage of the Passione strings is that the sound does not need to be developed by using excess bow pressure as the strings vibrate freely and easily. Immediate playability and exceptional tuning stability make PASSIONE a modern and very reliable steel core string suitable for the demanding arco bassist. 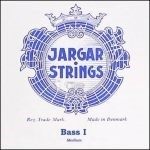 These strings share their general construction (steel rope core) with many other strings, but they have a very different vibe, thanks to some additional dampening materials. They are hand-wound with thin threads of metal - "aluminum, copper and different alloys," according to the manufacturer. What you get is a steel string with a softer, easier feel - and a surprisingly non-metallic-sound. They have sort of a "gut-like" top end, with their shorter sustain, thuddier attack, and warm tone. They're wonderful under the bow; relatively easy to bow without scratchiness, and a big, dark arco sound. Lots of body, less definition. But this may be a good thing, depending on your needs. Probably better as an ensemble string rather than a soloing string.