Stands: Which Bass Stand is Best for You?

Choosing a Stand for Your Bass
A Special "Buyer's Guide"

We carry a few options for bass stands, and they vary in price, design, and other features. So which one is best for you?

Well. that depends on a few things. So we'll start by asking a few questions:

We ask these questions because the various stands have design differences that might make one better than the other for your particular use. Some are more portable than others, and some are more stable if you're concerned about having your bass in a high traffic area (or around rambunctious pets and/or children).

So here are the stands we offer, with a bit of info to describe their pros and cons for each. We're keeping it brief and no-nonsense here, if you need further details (and to purchase any of them), you can click through to the full product page. Hope this info helps!

Basics: This is a very familiar design; it uses an A-frame bass with arms to cradle the bottom of the instrument, and an elevated cradle for the neck. So it holds the instrument securely in a three-point hold. Easy to use, folds to a flat-ish profile, not hard to manage.

Pros: It's quite stable. It features adjustable legs, so it works with most any size bass (or cello). It has a rubber spanner across the neck cradle to keep the instrument from tipping out. It has a flip-out hook for putting your bow within easy reach, which is located on the back of the upper cradle arm.

Cons: It doesn't travel as well as other options. It folds down mostly flat, but the footprint it takes up in the car is not insignificant. And carrying it, while also toting a bass (and maybe an amp, music stand, etc.) is not as easy as it would be with something that folds smaller.

Where it's best used: This is a great stand for the corner of the living room. It's stable and secure, and looks nice. Its black finish makes it low-key and very practical in most any decor. It's also very good in a practice room, as putting the bass on it (and taking it off) is simple and doesn't require excessive focus (no aiming for a little endpin cup, etc.)

Basics: This is an update to a stand that has been popular for years, and it improves some of the shortcomings of the original model. Its greatest strength is its portability, but it's also surprisingly stable. It holds the bass by using a V-shaped cup for the endpin, and two adjustable arms that hug the "C-bout" (the pair of cutaways on each side of the body.)

Pros: This stand folds very small for a stand that is so stable and useful. It's therefore highly portable. There's even an optional carry bag for it, to make it even easier to tote around. It also does not inhibit access to the neck - so while I'm not necessarily advocating it for this use, it is possible to play the bass while in the stand. It includes an optional top cap replacement that adds a hook for a bow - but you can use the standard cap for a lower profile if you don't play arco.

Cons: It's a bit more expensive than, say, the On-Stage model above. And one could argue that it's not quite as stable. But it is German-made, and that's probably where some of that cost comes from. Also, some people don't like having to aim the endpin into the little foot holder - though, the wide V-shape allows for a pretty generous target, and is one improvement over the older chrome model, which used a round cup that usually took a few attempts to negotiate.

Where it's best used: This is a great choice for gigging, especially in an orchestra pit, where space is at a premium, and you need ready access to your instrument. Though, in the dark, it might be tough to hit that target quickly for instrument switches (if you're doubling on electric.) But it's stable with a small footprint. And it travels very well! 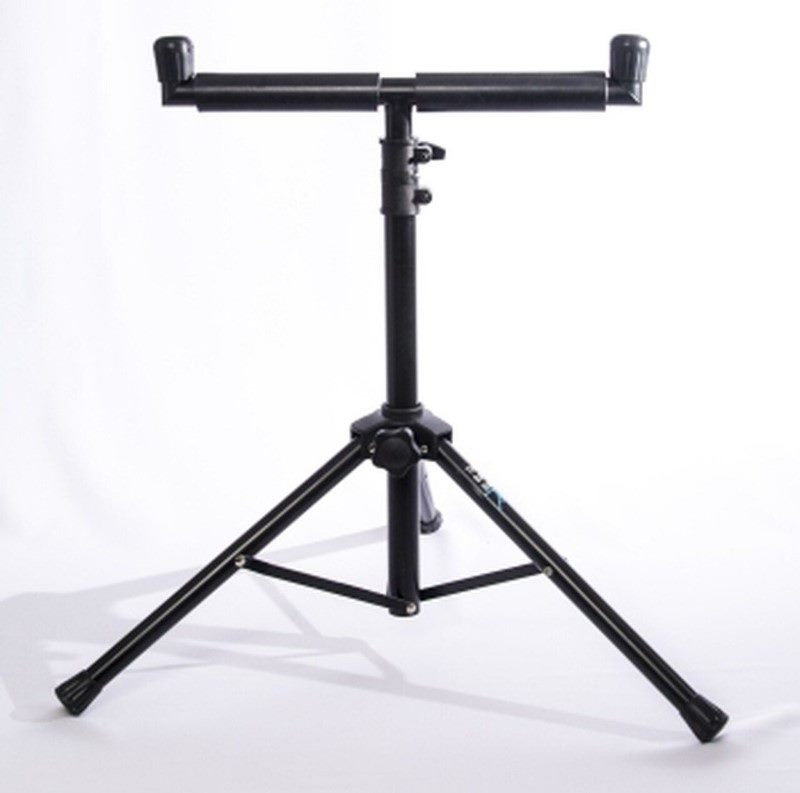 Basics: This is the best (IMHO) of a fairly new type of stand that holds the bass in a less "vertical" orientation. Rather than holding it fully upright, you lay the bass at an angle (approximately 40-50 degrees) and the bottom of the bass remains on the floor. This results in a very stable position, and very quick in/out.

Pros: So easy to use. So light and compact for travel (it even comes with an included carry bag). So secure. It is a win on lots of fronts. It's even rather affordable!

Cons: It does make your bass a little less noticeable, as it's not standing up "tall" - so a careless crew member carrying something across the stage might not see it as easily. It also does, by virtue of being more horizontal, take up more stage space. So it wouldn't be as good in a pit, or on a tight bandstand. Also, if you're concerned that the edges of your bass could get marred by laying directly on the floor, adding edge protectors to your bass would be recommended (we even provide them as an add-on for a very small fee.)

Where it's best used: I love this for live stage use. It's highly portable, super-stable, and cake to put the bass in and out of. But it probably takes up too much floor space to be useful at home or in your music studio.