Who are these "Gollihur guys, anyway?
aka: Who is Gollihur Music, and why should you buy from us? 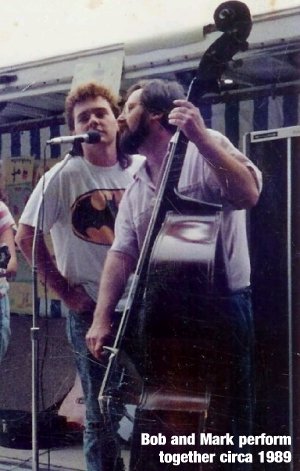 That's a question that is answered by thousands of positive comments on the web -- look around and ask around, and you'll get your answer.

Despite our spiffy website, who we are definitely NOT is a "big box" music store; we're bassists who specialize in what we sell! And we sell only what we like ourselves -- and what we think you will find useful for your needs. In our product descriptions, you'll find in-depth product details, expanded explanations of specific uses, side information for perspective, and other comments to help you choose the right gear for your specific situation. Most often, these comments are based on our personal experience with the products, not just the typical cut-n-paste info from the manufacturer's website.

Quite often, we include tips, help, and extra instructions with our products. For instance, if you buy a cake of rosin, we'll include a small sheet of tips for getting the most out of it, how to store it, how much to use, etc. If you buy a Bass Max pickup, you'll get Bob's instructions, with tips and tricks for getting the best sound - based on Bob's personal experience using the pickup on his own bass!

We work hand in hand with our many manufacturers. So much so, that we've often been consulted on new products, asked to test prototypes, and provided help and insight on product features and designs. We've been "instrumental" (pun intended) in the creation of new strings, pickup systems, preamps, amplifiers, speaker cabinets, and more.

Finally, we work very hard to get your order out and to you as quickly as possible (most items are in stock at all times!). We've measured our order turnaround efficiency - and confirmed that over 93.5 percent of qualified* orders were shipped out THE SAME DAY they were placed. We always hustle to get orders processed and out the door as quickly as possible!
* Qualified orders were placed on business days by 3pm Eastern Time and do not contain special order items or have customer-fault billing, payment, or contact issues.
So place your order with confidence - we're highly motivated to get your bass stuff out the door fast.

Is Our Site Safe? We have services examining our web site every single day to ensure that we remain safe from hackers and other online security threats. You can see the certified McAfee and GeoTrust logos displayed on the site (you can click those logos to visit their respective pages, if you'd like to find out how they help us to protect your information and privacy).

Our website is encrypted and fully PCI-Compliant. We are vigilant to protect your private information. 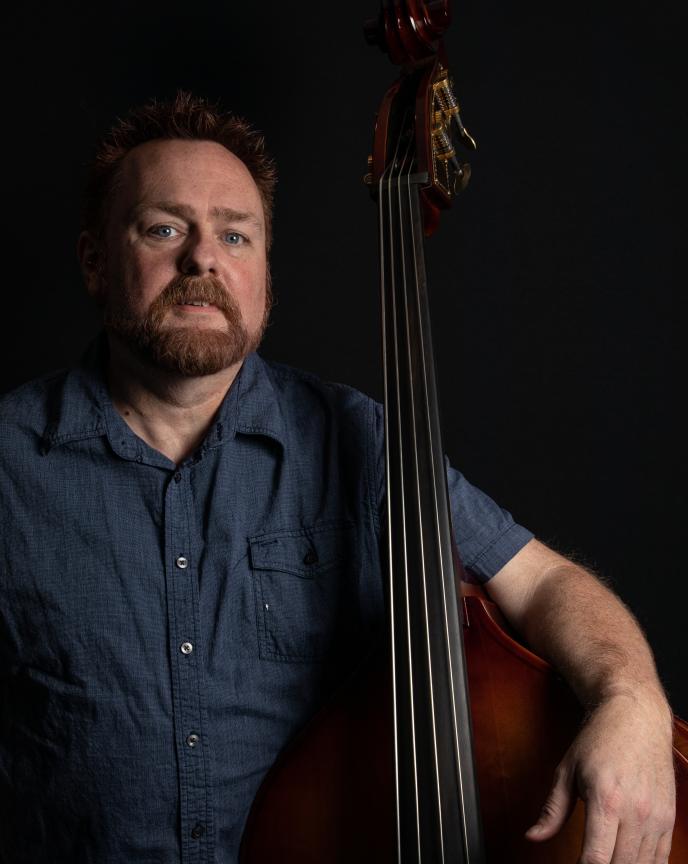 I've often joked that Bob (my Dad) should have encouraged me to play drums instead of bass - we could have made a killer rhythm section! But ultimately, bass chose me, and I've been playing, recording, and performing with bass instruments of all kinds for over 35 years. 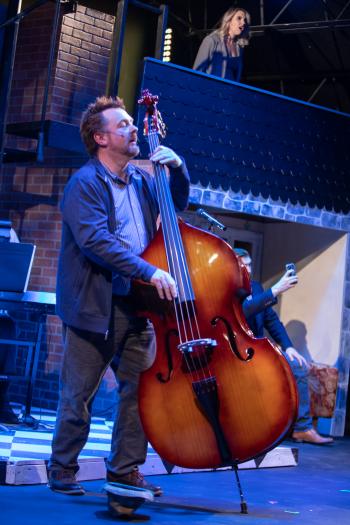 Most of my "legit" credits are as an electric bassist over the years, as I played in several original bands in a rock/pop genre - but the upright has been within easy reach since I was a teen. For instance, see the photo below, which is from the Spring concert from my senior year in high school (1988); it's my first public performance playing a double bass. While I can't say that I look back fondly to the waistcoat and lavender bowtie I'm wearing, I'm pretty confident that my playing was just fine!

I sometimes play my own fully carved URB in a group that plays traditional tunes on acoustic and traditional instruments, mostly for charity events. Though I've mostly been out the "spotlight" for a while, focusing on managing the business and raising my young daughter, I've been trying to get back in the fray with a low-pressure acoustic group. But I'm still looking for like-minded musicians. Know anyone?

I also own my own home studio (Digital Din), where my most recent album was recorded. As a result, I'm kind of a "gear nerd" - I've got a decent knack for the technical stuff, microphones, preamps, and using them to get good sound - and I love musical "toys."

I'm married to my wonderful wife Beki, and we have an amazing daughter, Cora. My pronouns are He/Him/His. 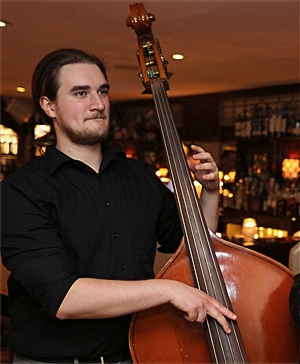 Ever since I got my first guitar in sixth grade, I have been playing music nonstop. Starting out learning tabs for my favorite rock and punk bands, I moved on to prog and metal -- and learning actual technique via lessons. Once I got to High School, I was asked to be the bassist for the jazz band, which was a completely new experience that I fell in love with; I enjoyed it so much, so that by my senior year I was auditioning for colleges on both upright and electric bass. During my four years in college I played in the big band, orchestra, jazz combos, pep band, and many other groups. I've been lucky to be exposed to -- and play -- all sorts of different musical styles, on both electric and upright bass.

I'm a bit of a gearhead, and I've really enjoyed experimenting with recording equipment and production techiques. After acquiring (and basically teaching myself how to use) a collection of recording gear, I was able to record an EP with my band in my "super-professional basement studio."

Since graduating college, I've been taking any bass gigs I can get. I love playing pretty much everything, and I especially love getting paid to play pretty much everything! Along with teaching privately, I am gigging steadily with a jump blues/swing band, as well as getting calls for small jazz groups and pit gigs. You can also catch me frequenting jazz jam sessions around the Philly area to build my chops and networking.

The Story of Gollihur Music
(in Bob's own words)

Once upon a time (ok, it was in 1997), Bob was looking for a new piezo pickup for his double bass, to replace his broken (and mediocre) one, but choked on the very high price tags ($500!!) of multi-string units. He didn't like the indefinite thump of an individual bridge pickup he tried, nor the muting effect on his sound caused by the pair of metal clamps that one of the most popular pickups out there uses.

He valiantly (and frugally—ok, he's cheap) experimented with constructing hobbyist piezo elements, then bought and returned a pair of piezos designed to be drilled and buried in a bridge ($75 for a pair of raw piezos!!), read up on pickup tests and the market at large... and then found out about K&K Sound and was intrigued—they had a four transducer piezo pickup listing for $137(!!!). He asked around the area and on the web—nobody responded. Then he tried to find one to buy—forget it! Well, it took him a while to find a K&K Double Big Twin, and without ever hearing it, he took the plunge. He was totally amazed at the full-range, warm sound, and went forth, proclaiming their praises:

"It sounds like my bass, not just a bass!"

Unfortunately, as he himself discovered, they were more rare than hen's teeth, since K&K seems to focus more on OEM than retail sales. K&K Sound kindly (and they are kind folks) granted Bob dealer status, so he could pass pickups and preamps on to fellow bassists at musician-to-musician discounts through the Internet. And holy smokes, as of March 1999, I started to advertise in bass-oriented magazines, like Bass Player, Bass World, and Dynamite.

This professional e-commerce site has grown substantially (through several growth stages) from the original, single page that described the initial experiences with the Double Big Twin and other K&K pickups. Since then, we've seen new pickups from K&K and I ended up developing the Bass Master RB pickup for rockabilly and country slap bassists. We've also worked together to develop a reasonably priced microphone system for double bass. Since 2003 I've used the Golden Trinity/Bass Max system along with my Acoustic Image Contra since most of my gigs aren't that loud.

Remember, I am a longtime bass player, and these are bass products I have used and/or thoroughly checked out myself. My philosophy was always this: if it doesn't pass the "Bob Test," I don't carry it. And since taking the reins in early 2014, Mark has continued to operate under that same philosophy.

And that also means you can call us and get an honest -- and detailed -- appraisal of anything we carry, since we have the personal experience to back it up. 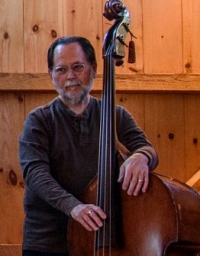 Bob retired from Gollihur Music in early 2014, He always said he was just your basic bassist — he started on string bass back in 1961 (!!) and majored in it at college, though he never pursued music on a full-time basis. But since his first paying gig in late 1963 he was always very concerned and involved with amplified sound and electronics. He consulted with and assisted other players over the years, built his own bass and PA cabinets, pickup and mic systems, etc. In the never-ending (it never does end, does it??) quest for "the sound," he found the K&K Sound pickups and ended up selling these pickups to other musicians pretty much by accident—it wasn't his main gig at the time but quickly grew into a more than full-time occupation.

In early 2014, Bob sold the business to his son, Mark, who took over the management of Gollihur Music. Bob spent the next few years enjoying retirement, doing a little travel, playing some more gigs, and spending lots more time with his grandkids.

Sadly, we lost Bob to cancer in 2022. Here's some more information concerning his legacy and passing.

Christopher is a talented multi-instrumentalist, performing many different styles of music. He joined Gollihur Music in 2011, and quickly became an indispensible member of the team - an "honorary Gollihur" as we often would say, only half-joking.

With his own music taking up more and more of his time, Christopher took the leap and moved on from Gollihur Music in the summer of 2019. He is currently pursuing his musical ventures, playing his solo music, doing workshops, writing transcription and lesson books, and playing in lots of great bands. Take a look at some of what he's got going on at his personal music website (he also has links to his social media pages there).

Do you want to chat about basses and amplification challenges? Strings? Bows? Something else bass-related?

Let's talk, and we will be glad to try to help—call us at the office at 856-292-3194; feel free to call during normal business hours -- and there's a machine to leave a message if we're out. We're in New Jersey (Eastern USA Time), so please consider any time differences.

Some of our Credentials

We have special Gollihur-Exclusive products we developed with:

We've developed and manufactured many of our own products, including: