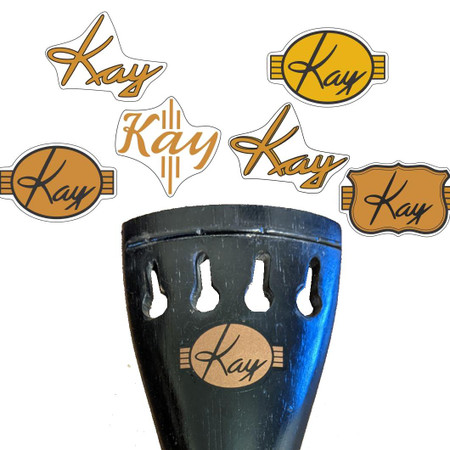 If the badge design you want is not "clickable" below, it is temporarily sold out and we're awaiting more to come in from the printer. Check back soon!

Over the years, Kay did sometimes (and sporadically) put a few different designs of colored decals on the tailpieces over the years. They were "waterslide" decals, very much like the ones that I used to put on my Snap-Tite model kits back in the 70s and 80s. Not all Kay basses got one, and if you've had to refinish or replace your tailpiece over the years, you may no longer have it (or maybe never did).

We provide an inexpensive vinyl "sticker" decal for those who'd like to have a "Kay" logo on their tailpiece to identify their old Kay Bass; but it's not made of the type of materials originally used for that sort of thing. So if you're particular about your bass having OEM-style badging, our vinyl option doesn't hold up to close scrutiny (but for those who just want a good-looking logo, it's still a cheap option!)

Our friend Steve over at KayBass.com -- for years, the foremost authority on the history of Kay Basses that the web has to offer -- has taken it upon himself to bring bassists a series of new, traditionally-styled reproduction tailpiece logo decals. These were carefully designed to be as authentic as possible, even including the "quirks" (like the fact that the bottom of the "y" gets "cut off" on a couple of the designs -- that's how the originals were done!) So if you're concerned about having your bass look "true to form," a real waterslide decal like these, modeled after the actual original labels, is definitely preferable to our "stick on" option.

This repro is professionally silkscreened and finished, the same way the original decals were made. Most of them are colored with bronze powder (again, for the closest reproduction of the original decals from Kay.) So, there's no home-based inkjet printing happening here, these are the real deal!

Decals are easily installed on any standard tailpiece, whether made of ebony, rosewood, jatoba, "ebonized" maple, etc. Simply dip in water to release the decal from the paper, and slide it into position. Gently dab to remove excess water, and allow to dry. Done! Full instructions are included, and there are several videos on the internet with information how to apply a waterslide decal.

They are permanent, though I suppose that if you later change your mind, you could "scrape" it off with some effort (but not without some likely surface scratching/damage to the tailpiece) -- so make sure you really want to do it... before you do it.

Gollihur Music is one of very few trusted retailers that Steve from KayBass.com has partnered with to provide these very special reproduction decals.

As I mentioned, installation instructions are included, but of course, the tailpiece is not - you can buy one of ours or supply your own.

Which one should you choose?

Well, a few things to know and share, first:

So ultimately, use the list below as a loose guide -- but don't get too hung up on the serial number ranges listed, as there may be many "correct" exceptions to the rules. And if you're not particularly concerned with being 100% date accurate (as if that were even possible, with the loosey-goosey way the decals were originally administered), I suggest you just choose the decal you like the most, aesthetically, and go with that one.

All of the above said, here's a breakdown of the designs that are available, and what basses they were used on:

This was the earliest decal, which was also used on some guitars, banjos and mandolins.

This was also used on some guitars.

This was also used on some guitars, cellos, and banjos.

This is not an original design, but rather a more "understated" version of the yellow oval that some players may prefer over the "brighter" yellow design.

This was also used on some guitars, cellos, and banjos.

MSRP:
Our Low Price: Special Price: $50.00
Regular Price
These Jatoba tailpieces are made by Engelhardt for their EM-1 model 3/4 size basses. It will be appropriate for 3/4 size basses. Measurements are provided in the photo. We recently acquired 4 new/old...

MSRP:
Our Low Price: Special Price: $10.00
Regular Price
A tailpiece hanger (aka "Tailgut") is an oft-overlooked "upgrade" or replacement part; it can have a surprising effect on the tone and feel of your bass. Even more surprising is when your old, weak...

MSRP:
Our Low Price: Special Price: $39.00
Regular Price
These Maple tailpieces were made by Engelhardt for their EC-1 model 3/4 size basses. It will be appropriate for 3/4 size basses. They're a little over 13.25" from end to end. They have the typical...

MSRP:
Our Low Price: Special Price: $32.00
Regular Price $40.00
Kay basses sometimes came with a logo on the tailpiece to identify the bass as a Kay. Many different designs were available over the years, with some being decals and others being a metal badge. To...

MSRP:
Our Low Price: Special Price: $599.00
Regular Price
This is a very nifty piece of gear, and I've been hearing stellar reviews from players for years. I inquired a few years back, and at the time, they were only supplying their microphones direct to...

MSRP:
Our Low Price: Special Price: $1,599.00
Regular Price $1,899.00
Full Scale • 4 String • One-of-a-Kind Paint Jobs! As you may already know, the NS Design Electric String Instruments have a long history. Their electric upright basses have been made and...

MSRP:
Our Low Price: Special Price: $6.95
Regular Price
If you've always wanted to add the old "Kay" logo to your tailpiece, but shuddered at the thought of drilling holes through the ebony to install a metal badge (and aren't really sure you could put a...