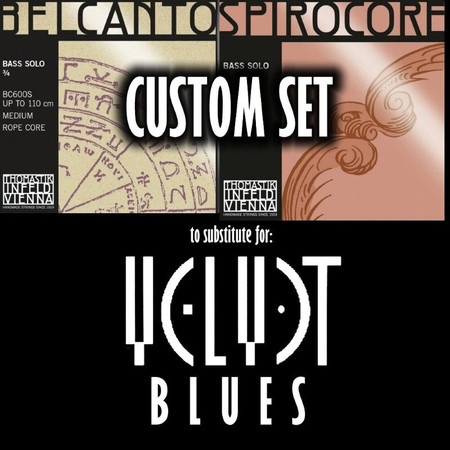 Velvet Strings was a company that made several well-regarded double bass string sets; the Anima, Garbo, and Blues were their most popular offerings. The Velvet strings were somewhat unusual in their design and materials usage, and over the years they have earned a very dedicated and devoted user base. With the unfortunate (and unforseen) dissolution of Velvet Strings, many people have been looking for string sets that have a similar feel and tone to the strings that the company once made.

Bernhard at Thomastik-Infeld (in Vienna, Austria) has worked with some of our customers to develop a combination of their strings that provide (as close as possible) a decent stand-in for the Velvet "Blues" set. This set on this page is what he came up with.

The set consists of a G and D from the Belcantos, and an E and A from the Spirocores. However, he advocates using the Solo Tuning versions of the strings (and tuning to standard pitch) in order to get the lighter, more flexible feel that the Blues offered.

Rather than make you put together the custom set, we offer it here as a pre-configured option.

The strings included are:

We hope this provides a good option for you to substitute for the Velvet Blues that you may have once loved!

MSRP:
Our Low Price: Special Price: $112.00
Regular Price $122.00
The Garbos have a thicker diameter and a big, dark sound. Great for jazz pizz players, they can often "hold their own" with a drum set. They have a solid core provides a solid and distinctive power...

MSRP:
Our Low Price: Special Price: $77.00
Regular Price $85.00
Velvet's Blue string is their first which doesn't feature a silk core - it's a synthetic, which lowers cost while retaining the Velvet sound and feel. It has great articulation, big volume, great...