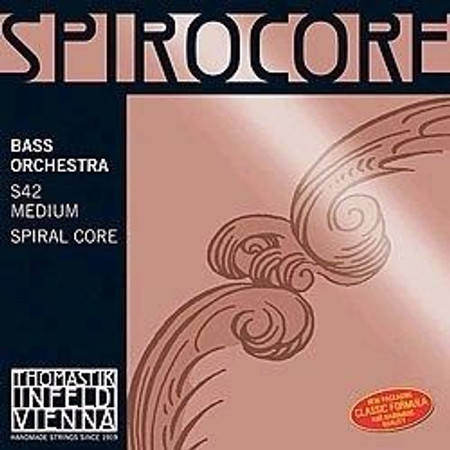 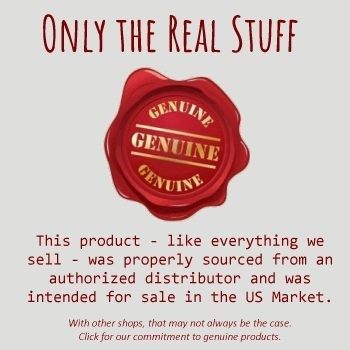 We carry the standard "Medium" Spirocores, as well as the Weich, or light weight gauge, which are more flexible and lighter. The modern string packages say "Orchestra," which refers to conventional orchestra tuning. We also carry the "Red Mitchell" Signature set, which is a set for tuning in 5ths, which is favored by some players.

Note about S42 and 3885 sets:
Spirocore strings have long been available in more variations than any other upright string since well before the internet. One thing that they do (that very few other stringmakers do) is offer a ¾-specific set AND a 4/4 set. Most other manufacturers have one set that is suitable for both ¾ and 4/4, since the scale difference is not that big, and one string can do double duty. A few manufacturers do only have "3/4 only" sets (commonly, those with synthetic cores, where winding the playable section of the string on the post might be problematic).

In any case, before the internet made it practical to have large quantities of strings on hand, many local violin shops would usually stock just a couple of sets of upright bass strings. Since they were expensive, and rarely sold, it made sense to minimize stock by keeping only the best sellers on hand – or, focusing on the variants that would suit the largest possible clientele. Since Thomastik made both ¾ and 4/4 Spirocore sets, but other manufacturers had sets that would work on both sizes, many string shops would prudently only stock the 4/4 (S42) sets, selling them to bassists who came in looking for a set for their bass, regardless of whether they had a ¾ or 4/4 size bass. Most players, to this day, don't even know there are two different sets, and if you walk into a string shop and get a set of Spiros, I'd venture that – 9 times out of 10 – you're going to leave with a set of S42. As a result, the S42 set has become the ubiquitous Spirocore set.

TL;DR: So, in summary, the most popular sets are the S42 variant; they are designed to be used on 3/4 and 4/4 size basses. If you have Spiros on your bass, chances are very good that they are the S42/S42W set. However, Thomastik also makes a 3/4 specific set, designated the 3885, which is very specifically sized and designed for optimal tension on a 3/4 size bass. There is a slight tension difference between S42 (4/4) and 3885 (3/4) size on a ¾ size bass, with the S42 being slightly lighter.

Don't know which one to get? Probably, you'll want to get the S42 variant -- they are, far and away, the most popular (and what you'll end up with if you buy from a store that doesn't specify). Only very particular players bother with the 3885, as the difference is quite minimal to most of us.
View AllClose

MSRP:
Our Low Price: Special Price: $274.95
Regular Price
Spiros are an old favorite for jazz and other genres and has been a popular string for many years. They were one of the first decent metal strings to be adopted by strictly gut string players-- in...

MSRP:
Our Low Price: Special Price: $259.00
Regular Price $274.95
Spiros are an old favorite for jazz and other genres and has been a popular string for many years. They were one of the first decent metal strings to be adopted by strictly gut string players-- in...

MSRP:
Our Low Price: Special Price: $262.62
Regular Price
Pirastro's popular Obligato strings have a solid synthetic core with a very thin metal wrap. They were designed to emulate gut strings, and they did a darn good job of creating such a string. Their...

MSRP:
Our Low Price: Special Price: $283.85
Regular Price
Pirastro released these steel rope-core strings, which are tailor-made for orchestral bow style (arco) players, in 2010. For a metal-based string, they are not "metallic" sounding at all, and have...