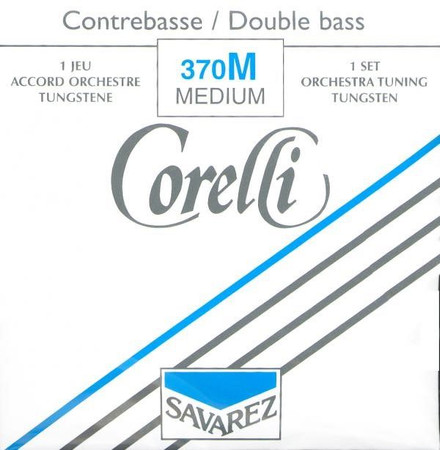 These strings are one of my personal favorites for my own particular double bass needs -- but that doesn't mean they are perfect for you. I like them for their versatility and articulate sound. These are not your Daddy's doghouse bass string... unlike the more typical and earlier string types, these have an edge to their attack, rather than the traditional blunter attack. Physically, they are thinner in gauge when compared to other strings using the typical Light/Medium/Heavy sort of measurement scheme. I also find them to be more flexible, less stiff, so I can really dig in. I have hand/nerve problems so I prefer a string that responds more easily and with less effort. They can be bright, especially initially, but calm down after play. They are also very easy to bow. I have used them sucessfully with magnetic pickups. The next paragraph is some of the marketing stuff from Corelli:

Essential discoveries in specific materials like sophisticated rope cores and specially treated high-tech metals, give these strings their exclusive characteristics. They are the result of several innovating technologies applied to their composition and winding process. Their thinner gauge allows a very bright sounding and great playing easiness. The high precision of their diameter, obtained thanks to computerised techniques of polishing and gauging, offer a perfect tuning accuracy. The 370 orchestra strings benefit from the Tungsten technology thanks to which the strings are thinner than the usual ones, easy to play, and much more brilliant.

Did I mention they are made in France by Savarez, and that Francois Rabbath was involved in their development?


A Special Note About Corelli Gauges

Corelli 370 strings come in three different gauges: M (Medium), F (Forte), and TX (Extra Forte). However, due to their construction and composition, the 370M strings -- which, by the way, are the lightest 370 set they make -- feel and play a good bit "lighter" than most other "medium gauge" strings.

This is why we describe the 370M strings as "lighter" and the 370F (which compares more directly to most other medium strings) as the "medium" weight string. If you prefer a string that has a "medium weight" feel, try the 370F (Forte) gauge.

Anyway, they come in M (Medium), F (Forte), and TX (heavy), though even their heaviest, the TX strings, are not as heavy as some other "heavies" - all of their sizes are a good deal lighter than many other strings. I prefer the Forte weight in most cases, though the TX are not much thicker; if you prefer a slightly meatier string, perhaps the TX should be your choice, though I'm not certain you'd be able to tell much difference.

Corelli does not list gauges on their packages; originally I measured and posted each, but I have since obtained the following measurements from them:

Bob's STRING CHANGING INSTRUCTIONS are included with every string order!
Get a preview from my on line FAQ: CHANGING STRINGS ON YOUR UPRIGHT BASS

Important Notice regarding Low E and Low B Corelli strings from the back of their packaging for those two strings (only):

"In mounting the string be careful that the metal-wrapped portion (not covered with silk) does not go around the tuning peg. This could lead to damage and eventually break the string..."

First, let's talk about the E string. In my opinion the wound section is a little long for most 3/4 size basses, and given the close position of the E string winder, the wound section will almost always have to be wound at least partially around the roller. Therefore, if you have a conventional, normal sized acoustic 3/4 size bass and the wound area goes around the peg, if it breaks I will go to bat for you to get a replacement. But I cannot recall a single incident of a Corelli string breaking for this reason in over 10 years. On the other hand, if you have an unusual bass that does not have the usual afterlength (distance from bridge to tailpiece) or have small, electric bass style tuners with small rollers, you are rolling the dice - if it breaks under those circumstances I cannot get credit from Corelli for a return.

I have only had one report of a broken B string, but given the larger size of this string it may be unwise to choose it and attempt an install if the wound string section reaches and is wound around the roller, especially on smaller EUB-style tuners. The warning on the back of the package is valid, and I cannot get credit for the low B string if it is broken under those circumstances.

MSRP:
Our Low Price: Special Price: $140.00
Regular Price
These strings are one of my personal favorites for my own particular double bass needs -- but that doesn't mean they are perfect for you. I like them for their versatility and articulate sound. These...

MSRP:
Our Low Price: Special Price: $111.25
Regular Price
Corelli's 370 strings are among my personal favorites for my own particular double bass needs. Corelli's 380 strings offer an even more affordable alternative, making them a good student string...

MSRP:
Our Low Price: Special Price: $140.00
Regular Price
These strings (in their 3/4 size incarnation) are my personal favorite for my own particular double bass needs -- but that doesn't mean they are perfect for you. I like them for their versatility and...