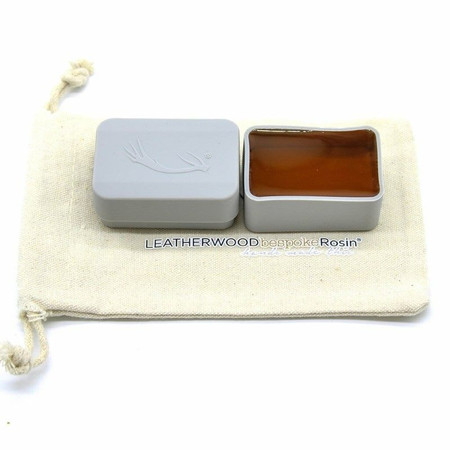 SKU:
UPC:
FREE SHIPPING:
to ALL 50 US States

This is some pretty special rosin. I'd hope so, at this pricing! They call it "Bespoke" - meaning "customized" - because you get to mix and match several different hardness/grades to get exactly the feel that you need for your style of play.

The rosin ingredients we are use are derived from pure pine resin.

You get a 2-pack - so choose two recipes from the range of recipe grades (see recipe chart graphic for explanations). From hard and crisp rosins to soft and sticky rosins, each of these recipes best suit specific playing styles and conditions. And, you might find your ideal recipe is a mix of a harder and softer grade. This is why we provide 2 recipes per pack. You can blend them on the bow effectively by alternating swipes.

According to the manufacturer, these rosins do not dry out like other rosins and one recipe would last 1-2 years with intensive playing. Players report that it plays cleanly - no powder all over the strings, and no flaking.

The higher the percentage the softer the rosin. Firstly work out what type of playing context you want the recipe for, then pick a higher grade if you are in a colder or dryer climate, or a lower grade if you are in a hotter or more humid climate. For example. In Singapore or Mexico, the 60% might be too soft in those hot climates, and these rosins may be more like a liquid, so a 40% recipe would be more ideal here. However in Scandinavia (very cold and dry climates) the 60% will be harder and not as soft, therefore ideal.

Some players have made comparisons to popular rosins; players found that the 30-40% range seemed similar to a popular rosin from Sweden; whereas 40-50% was similar to a US-made rosin that is well known for its soft adhesion, while being grippy but not as aggressive. So if you're using one of those rosins, and want to start with something familiar, those comparisons might be helpful.

Use the recipe grade chart (in the photos, above) to choose your desired recipes (2 per pack). They can be the same recipe or different recipes. Select the two that you want, and add to cart. Simple!

When you receive your rosin:

A note about "old formula" vs. "new formula" concerns:

There are a few threads on bass message boards, concerning some changes that apparently occurred between the initial release of the Leatherwood rosin to the current rosin formula. We have reached out to our Leatherwood rosin distributor for clarification, and were told, "Andrew, the owner and rosin maker, assured us that his new recipes were released in March 2020, and that there is no chance we accidentally received a old batch. The older recipes that reportedly had some issues are long gone."

You can be confident that all of the Leatherwood rosin we have (we started carrying Leatherwood some 7 months after the new recipes were developed) are the most recent, updated formula. And, like all of our rosins, we rotate stock to ensure that no one ever gets an old, stale cake.

The Amber Range from Andrew Baker on Vimeo.

MSRP:
Our Low Price: Special Price: $8.50
Regular Price
Hidersine's is an affordable all-weather rosin, made in England, and if you're just looking for a general-purpose rosin, or are dipping your toes in the water, it's among the most affordable choices...

MSRP:
Our Low Price: Special Price: $9.00
Regular Price
Pirastro Mittel (Medium) Bass Rosin is made in Germany and has a relatively neutral consistency which is good for most environments. The large-sized "cake" is foil-wrapped and comes in a cardboard...

MSRP:
Our Low Price: Special Price: $11.25
Regular Price
Rosin is key in getting a good bowed sound, so don't cheap out on this key ingredient to success, it can last a long time - and isn't very expensive. In fact, some bassists carry two or three...

MSRP:
Our Low Price: Special Price: $28.00
Regular Price
This releatively "new" version of an "old" rosin is a bit on the pricey side, but it's got a growing reputation of being worth every penny. Manufactured here in the USA, it has a median texture,...

MSRP:
Our Low Price: Special Price: $11.25
Regular Price
Rosin is key in getting a good bowed sound, so don't cheap out on this key ingredient to success, it can last a long time - and isn't very expensive. In fact, some bassists carry two or three...