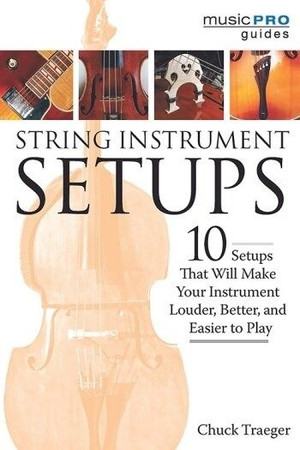 Includes 10 Setups That Will Make Your Instrument Louder, Better, and Easier to Play
by Chuck Traeger, with a "seven-word" by Ron Carter

Chuck Traeger was a well-known player, recording artist, and bass luthier for many years in New York, and his seriously comprehensive (and sometimes controversial) books on repair and setup of the double bass are very popular. Those books, which we also carry (see "related items," below) cover nearly every aspect of the repair and maintenance of your upright bass, and are considered a "bible" of sorts for many who work on basses and other stringed instruments.

But if you're not a luthier - or even an aspiring one - then those books can be a bit much to digest, especially if you're just after making some smart, cost-effective adjustments to improve the sound (and playability) of your bass.

That's what this book is for.

This isn't just a "Cliff's Notes®" of the original books, though. It is a new work, designed to give clarity and understanding to the factors that improve the tone, volume, depth, and overall sound of a bass. It goes into what he calls "Traeger's Principle," the basic principle of how your instrument actually functions when it is being played. The book is broken up into chapters discussing what, exactly, you can do to improve each aspect of your instrument and benefit the whole. The chapters deal with various parts of the bass (endpin, bridge, soundpost) and discuss various materials and their effects, proper setup, and philosophies on how different instruments react differently based on different variables.

This can be a very useful book for just about anyone who plays - or works on - upright basses. It offers suggestions for "fine-tuning" your bass for your specific playing style and tonal requirements. Whether you're just looking to optimize your instrument, or bringing a real "basket case" old bass to life, you'll find this book to be helpful.

All of that said, even if you're not brave enough to tackle most of the concepts, this book is a very useful addition to your library. It "pulls back the curtain" on the philosophy and specifics of setup; so even if you don't do the work yourself, you'll know what is involved, what questions to ask of your luthier, and so on.

Publisher's Description of This Book

String musicians, know only this: everything is vibrating. The movement of the spheres? A guru's cryptic musing? Hypersensitivity to plate tectonics? Not quite. This is the briefest possible distillation of Trager's Principle, which states, “When a string instrument is being played, everything is vibrating, from the top of the scroll to the tip of the endpin.” This simple formula, the purest distillation of master luthier Chuck Traeger's lifetime of learning, holds the key to configuring your instrument to your specifications. It also forms the crux of his third and final book: String Instrument Setups: 10 Setups That Will Make Your Instrument Louder, Better, and Easier to Play.

At the height of the Big Band era, Traeger, a double bassist, performed alongside a veritable who's who of New York jazz musicians including the likes of Louie Armstrong and Sidney Bechet. In was in this capacity – as Charlie Traeger, one hip cat and a regularly frustrated client of NYC's instrument repair shops –Ÿthat he began his pursuit of sonic perfection. In 1969, satisfied with his abilities but devoted to constant self-improvement, he opened his first repair shop. Before he knew it, his reputation was preceding him, and he found himself handling the instruments of school band novices and the New York Philharmonic alike. On his seventieth birthday, Traeger retired from musicianship and devoted himself to comprehensively documenting all he had learned about his craft. Two decades later, shortly after he put the finishing touches on String Instrument Setups, Chuck Traeger passed away on November 9, 2016. Scarcely a month had elapsed since the death of his beloved wife, June, to whom he was married for over sixty blissful years. Albeit with a heavy heart, we at Hal Leonard Books are proud to present this remarkable man's parting gift to generations of current and future musicians.

String Instrument Setups is the culmination of forty-five years of acoustic research involving Trager's old standby, the double bass, and, in turn, any string instrument with a moveable bridge and a moveable tailpiece, or one that can be made moveable. Armed with this book, we're confident that the average musician can enter almost any string instrument maker or repair shop in the world (the exception being a shop that has already read String Instrument Setups), ask for their best repair or restoration, then make that instrument sound louder, better, and easier to play, every time. This is neither braggadocio nor hyperbole; rather, it's the confidence instilled by one man's extensive research, wholehearted devotion, and firm belief in the sacred bond between instrument and musician. After reading String Instrument Setups, we're sure you'll feel the same.

"Cliff's Notes" is a registered trademark of Houghton Mifflin Harcourt Publishing Company - we used the term as a reference, and no connection to this product or Gollihur Music is implied or asserted.

MSRP:
Our Low Price: Special Price: $999.00
Regular Price
My dad (Bob) and I have become well-known for our "frugality" (okay, I admit it, sometimes I'm cheap). And a lot of the gear we offer on the site is geared towards the hobbyist player on a budget -...

MSRP:
Our Low Price: Special Price: $9.00
Regular Price
Need to remove rosin build-up from the face of your instrument? Petz has the answer. A rosin-removing solvent and a follow-up polish can help you get rid of that ugly, tone-deadening build-up. Petz...

MSRP:
Our Low Price: Special Price: $17.00
Regular Price
"Jazz" and "Classical" Models Available This is cool! A useful tool for setting up double basses, provides instant measurables so you can speed up your workflow. Made of durable plastic (Lucite?) and...

MSRP:
Our Low Price: Special Price: $149.00
Regular Price
The Bass Bridge Foot Fitting Jig helps you fit the feet of the bridge to the top of the instrument. This tool holds the bridge firmly at the correct angle as you go back and forth on sandpaper to...

MSRP:
Our Low Price: Special Price: $225.00
Regular Price
The Bass String Lifter is a very practical tool for exchanging, adjusting and fitting bridges.Designed to lift the tensioned strings off of the installed bridge, allowing work to be done without risk...