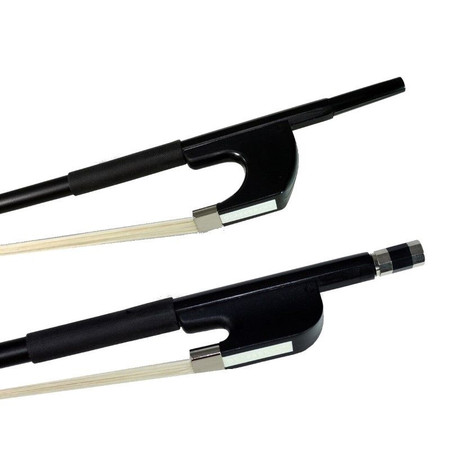 These are the well-known Glasser name brand German/Butler Style (top in picture) and French Style (bottom in picture) bows (NOT the econo-buy cheapies you can find from some sellers on eBay!) Glasser is the company that patented the world's first Fiberglas bow.

They are strung with real horse hair - which in my opinion is a must (while there are some good synthetic hair options out there on some higher-end bows, when you're shopping in this price range, the fake stuff will be the cheap stuff - and trust me, you don't want the cheap stuff unless you're fond of being frustrated).

A good alternative to an inexpensive wood bow, this is generally considered a student model bow, with its affordable price point, and more durable construction - it's a common bow for school-age developing players, as it's less likely to be damaged by (ahem) "less than careful" handling. It also won't warp.

It's an excellent choice for beginner or intermediate students, occasional use for someone who primarily plays pizzicato, or as a budget-friendly backup. They feature a half-lined frog with a metal under-slide, a leatherette grip, and unbleached genuine horsehair.

Don't forget the rosin! It won't make a sound (well, at least not a very pleasant one) without it.

Don't know whether you should get French or German style? Check out our bow FAQs, in the "Resources" Menu above!

We include our "Tips for bows, rosin, and quivers" with every bow purchase - look for it in your package!

MSRP:
Our Low Price: Special Price: $79.00
Regular Price
The aluminum shell of this bow case offers substantially more protection than a simple bass bag sleeve. The inside of the durable shell has flocking to keep the bow from rattling around, and the case...

MSRP:
Our Low Price: Special Price: $12.00
Regular Price
We've carried the same bass bows (Pernambuco and Brazilwood) for close to 20 years now. A few years in, we changed the hair that we specified for these bows to a new blend of darker hair that Bob...

MSRP:
Our Low Price: Special Price: $799.00
Regular Price
We introduce to you the G.Werner Pernambuco Bass Bow. These bows are handmade in Bubenreuth, Germany (by Dorfler,) from select Pernambuco wood that has been perfectly aged and seasoned for...

MSRP:
Our Low Price: Special Price: $23.99
Regular Price
BOWS ARE FRAGILE. I hate taking the calls from players (or their parents) whose bow took a dive off the music stand or chair. A bow is as much a musical instrument as your bass is, and they can be...