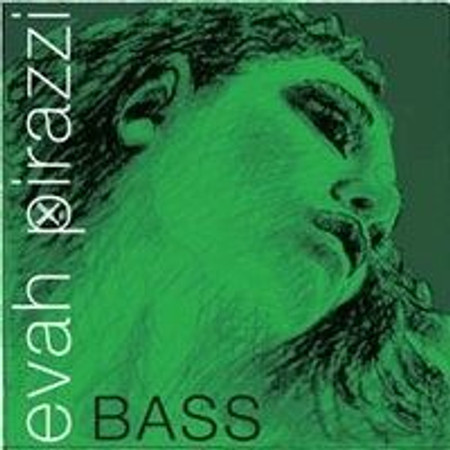 The Evah Pirazzi BASS strings created quite a stir and a lot of demand when they were released in 2007. They have a core made from a new synthetic fiber that Pirastro recently developed, wound with a polished chrome steel.

Their sound has some similarity to Pirastro's popular Obligato strings, but they also have marked differences. They have generally less sustain than most metal-core strings; their damping is such that their sustain is middling, but isn't overdone or "electric-bassy" sounding; the decay fades quicker than that of most steel strings. Plucked, they sound full and fat, with a strong, solid fundamental and very good projection. Most notable is a subtle percussive "ping" to the front attack of the note, when playing pizzicato (with fingers), that provides a nice touch of articulation to an otherwise warm, dark tone. This unique and interesting characteristic sets the Evahs apart as an all-around good choice for a variety of styles, particularly if you like the "old school" sound -- yet with something "new" thrown in.

The balance from string to string is good, and arco response is warm and full-bodied. With their big sound, they can practically shake the room when you bow a low E -- very satisfying! They have plenty of "grab" for the bow and that "just right" tone for arco: full and complex, not scratchy at all.

Sticking to a comparison to the Obligatos, they're also a different feel; they have a beefier tension, with less "roll" (lateral twisting when you're playing, particularly pizz). However, most players report that the "tightness" or "stiffness" is reduced as the strings break in - sonically, they also seem to require some "break-in" to really start to bloom, and even begin to growl a bit better once you've been playing on them for a couple weeks.

Due to the reduced string tension, the playability of the Weich (light) Set is very easy. The string tension of the Weichs on an average 3/4 size bass is about 10% lower compared to the Orchestral/Medium set. According to Pirastro, The Weich Set has a "pronounced core sound" and the sound is brighter and growlier with a little more sustain. I suspect that this may -- at least in part -- have something to do with increased interaction with the fingerboard, due to the lighter tension.

We also carry the Solo Tuning Set, which is designed to be played with a tuning one whole step up (F#/B/E/A), but can be tuned to standard pitch as an alternative (making them slightly lighter still, compared to the weich set.)

SPECIAL NOTE ABOUT THE HIGH C STRING
Pirastro makes only one high C-string for the Evah Pirazzi sets, and they consider that C-string to be to be "medium" gauge. Same with the Low B. So whether you get a medium or light set, if you want a high-C 5-string set, you can get the medium high C or Low B. This is pretty typical (multiple high C-string gauge options, particularly, are very rare), but be aware that the high C string is also markedly higher in tension than the rest of the set - and especially in conjunction with a weich (light) E-A-D-G, the high C may feel a little "out of sync," tension-wise, with the rest of the set. The reason for this tension disparity is because the C uses a special kind of construction to get a long-life string that is a perfect fit with the other strings in terms of sound and playability. Essentially, to get a lower string tension that matched the set tonally, you would have to work with more fragile materials. We know this, because we asked Pirastro! And we wanted you to be aware of it.

4/4 bass? Pirastro designs these 3/4 size bass strings to fit on a standard 3/4 size bass and most 4/4 basses. They may very well fit your bass if it is larger than 3/4. For your reference, the length of a representative string, as measured against the bass tailpiece to the nut is 55.5 inches (51.5" playable, 4" for silk-wrapped afterlength), plus an additional silk-wrapped 11.75 inches to handle stringing in the pegbox.

MSRP:
Our Low Price: Special Price: $52.14
Regular Price
The Evah Pirazzi BASS strings created quite a stir and a lot of demand when they were released in 2007. They have a core made from a new synthetic fiber that Pirastro recently developed, wound with a...