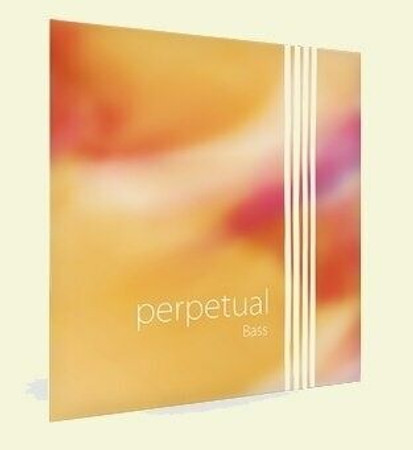 For one, their feel is definitely on the flexible side, feeling more like Pirastro's Obligatos (without the "roll") than their Flexicore Deluxe, which is on the stiff side. While they felt a little "tight" when we first put them on, they seemed to settle down pretty quickly (like, within minutes, not days). Tension is comfortable, and gauging is a hair or two thinner than many of their other popular offerings. They have articulation, but they're not overly "brash" - having a nice warmth with a clear fundamental pitch. It's a nice balance that many strings strive for, but don't always achieve.


What about arco? Well, in their words, "When played arco the Perpetual bass has a clear yet complex tone with an intense power that can be felt by the musician as well as the listener. With their effortless left hand feel and an astonishingly quick bow response, the Perpetual allows the player to practice for long periods of time with little fatigue."

MSRP:
Our Low Price: Special Price: $227.84
Regular Price
Pirastro's popular Obligato strings have a solid synthetic core with a very thin metal wrap. They were designed to emulate gut strings, and they did a darn good job of creating such a string. Their...

MSRP:
Our Low Price: Special Price: $59.55
Regular Price
The FLEXOCOR DELUXE Bass string is Pirastro's newest version of their Flexocor "rope core" string set. No, it's not made of rope - the carbon steel strands that make up the core of the string are...

MSRP:
Our Low Price: Special Price: $251.24
Regular Price
Pirastro released these steel rope-core strings, which are tailor-made for orchestral bow style (arco) players, in 2010. For a metal-based string, they are not "metallic" sounding at all, and have...

MSRP:
Our Low Price: Special Price: $221.40
Regular Price
The major string-makers are always looking for ways to innovate, and Pirastro's newest (July 2019) entry into the fray is the Perpetual String Set. Pirastro says, off the bat, that they are "mainly...