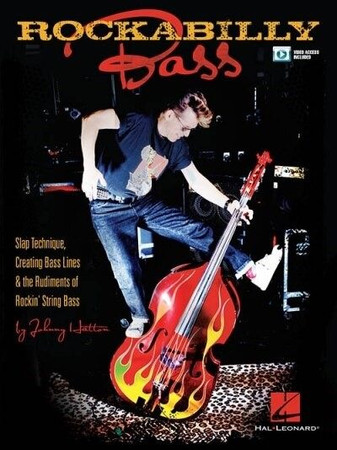 Slap Technique and the Rudiments of Rockin' String Bass

Who better to teach the fundamentals of slap bass than someone who has a career spanning from Elvis to Brian Setzer? Johnny Hatton has left quite a impression on the slap bass world over the past 40 years. We've been searching for a decent rockabilly bass method book for a long time, and this one has the goods.

Although only clocking in at 56 pages, this book contains enough material to take you all the way from buying your first bass to developing the techniques necessary to handle just about any slap gig you could come across. Johnny is detailed and concise in his descriptions of the techniques, and presents them in conjunction with transcriptions of basslines from well known tunes; from Marshall Lytle's iconic line on Bill Haley's Rock Around the Clock," to Cash's "Ring of Fire."

In addition to the well-written exercises, Johnny has recorded a series of videos that you can access online (included with the purchase of the book) to accompany the lessons and examples in the book. He does a great job of slowing down the right hand, so you can see the actual mechanics of slapping, as well as being able to make sense of what the lines sound like at a slower tempo. If you've ever wanted to learn slap bass -- or hone your skills -- this is a very good place to start.


Who is Johnny Hatton?

John honed his 50's slap-bass style in Rhino Records' "Big Daddy", an 8-piece 50's band, which turned modern hits into retro 50's classics. This band conquered the world with a top 10 hit and a tour of England. Their eight-week gig in Sydney, Australia, landed them another hit with their version of "The Land Down Under." It was in this band that Hatton created the character known as "Spazz", the slide-rule-wielding nerd. The moniker has followed him to this day.

Johnny "Spazz" Hatton has been playing rockabilly slap bass with the Brian Setzer Orchestra since February of 2002, and has recorded six Grammy-Nominated CDs. In addition, Johnny has played with the Royal Crown Review since 2006, a band that specializes in jazzy swing.

MSRP:
Our Low Price: Special Price: $345.00
Regular Price
Back in 1998 Bob talked with a lot of Rockabilly players about helping them to get THE SOUND. There was nothing out there that could deliver both a strong, feedback-resistant bass signal AND that...

MSRP:
Our Low Price: Special Price: $159.00
Regular Price
Do you need a durable alternative to more costly and problematic gut strings, for playing aggressive styles like rockabilly, or acoustic bluegrass - maybe even old-school jazz? Presto! I have your...

MSRP:
Our Low Price: Special Price: $99.95
Regular Price
Hard-playing slappers often prefer a string with plenty of bounce, but not a lot of tension. No one likes spending a 4-hour set whacking their hands against high-tension, inflexible strings. Common...

MSRP:
Our Low Price: Special Price: $159.00
Regular Price
The Eurosonic tapewound strings have developed a cult-like following with many bassists over the last 2+ decades that we've carried them. Made in Poland, they are well-made, durable strings. Now...

MSRP:
Our Low Price: Special Price: $2,199.00
Regular Price
Wait, you named the bass "Ed?" Why yes, we did.Our Estle Louis bass lineup has been doing very well, though rockabilly and psychobilly players have been asking for a similar bass for them. So we put...

MSRP:
Our Low Price: Special Price: $24.95
Regular Price
If you ask, I will always suggest that you start your upright bass adventures by studying with an experienced and schooled teacher. The "Simandl Method" is a very common and well-respected...