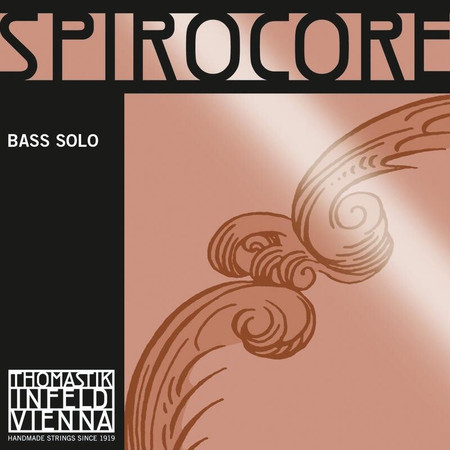 These strings are the SOLO Tuning Set, which is a set for tuning one step higher than standard E-A-D-G tuning. This is commonly used by arco players who are doing solo repertoire; however, many folks buy solo sets to tune to "standard" tuning to create a sort of "extra light" tension option. They are tuned, from low to high, as F#-B-E-A.

The Spirocores are available in many different sizes and tensions. The most popular sets are the S42/S43 variant; they are designed to be used on both 3/4 and 4/4 size basses. If you have standard tuning Spiros on your bass, chances are very good that they are the S42 set. However, Thomastik also makes a 3/4 specific set, which in the solo gauge is designated the 3886, which is very specifically sized and designed for optimal tension on a 3/4 size bass. For the Solo Tuning sets, the (yes, confusing) numbering system is S43=S42 (4/4 and 3/4) and 3886=3885 (3/4-specific).

Don't know which one to get? Get the S43 variant -- they are, far and away, the most popular (and what you'll end up with if you buy from a store that doesn't specify). Only very particular players bother with the 3886, as the difference is quite minimal to most of us.

MSRP:
Our Low Price: Special Price: $260.00
Regular Price $274.95
Spiros are an old favorite for jazz and other genres and has been a popular string for many years. They were one of the first

MSRP:
Our Low Price: Special Price: $148.00
Regular Price
These strings are one of my personal favorites for my own particular double bass needs -- but that doesn't mean they are perfect for