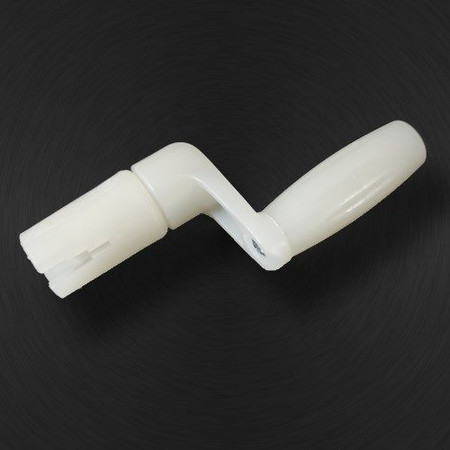 We've been rocking the TurboTune string winder for almost 20 years. It's been through several licensees, and was even made independently by the patent-holder for a while. Now the production and distribution has been picked up by a new, very well-known company. A longtime proponent of this great item, we were able to work a great deal to sell these in "bulk" - meaning that you're not paying an extra couple bucks for the cardboard header card (and the extra costs to ship them) - so you get the same great product, without the throwaway packaging, for less money.

Here in the shop, we often have to do quick string changes. Without this little tool, it would be a lot more of a hassle. It's wide enough to fit most upright bass tuning machine heads (though not the Sloane tuners, unfortunately) as well as most any other instrument, including guitars, electric basses, even mandolins!

I don't know about you, but all those repetitive tuner key turns wear me down. Sure, the manual crank is better than twisting with your wrists. But anyone who's ever built or repaired anything knows that the most important invention of the 20th century was the electric screwdriver. Now you can use that miracle tool to automate string changing using this handy contraption!

Or you have an excuse to go to the Home Depot/Lowes/Sears Hardware Store to buy... another one!!!! (My wife believed me when I told her I had to get me one of the cool Gyro ones in the photos. At least I think she bought it.) The Black & Decker Gyro Screwdriver totally rocks -- truly easy operation with one hand, and no buttons to fumble with. You just firmly grip it, and slightly turn your wrist. The screwdriver automatically senses your movement and starts turning that way. SUPER cool.
The current version of the Turbo Tuner is molded in a pale white color with a slight bluish hue (I've done my best to get a good photo). Why the odd color? It GLOWS IN THE DARK!

As for operation, as you can see, the crank separates from the business end of the unit so you can exercise your electric screwdriver instead of your hands. It has the added advantage of enabling one-hand, more controlled winding, because you can use your other hand to better guide the string onto the roller.

It can, of course, also be used with the included hand crank. See photo to see how the two halves just pull apart, and you insert the tuning chock into a electric screwdriver (the chock has a standard hex end) as well as what the unit looks like fully assembled with the crank, above and to the left.

I guess you can tell I like the TurboTune. You will, too.

Note that the Turbo Tuner's multi-faceted chock fits almost all tuners, from tiny mandolin pegs all the way up to upright bass. However, we have confirmed that Sloane double bass tuners are just a bit too thick and the Turbo Tune won't fit those without modification (folks have used a thin file to slightly widen the opening and had success, but you perform this modification at your own risk).

MSRP:
Our Low Price: Special Price: $35.00
Regular Price
This single transducer for external mounting has a diameter of ½". This one head universal transducer can handle a considerable number of instruments, such as Guitars, Saz, Oud, Bouzouki, Balalaika,...

MSRP:
Our Low Price: Special Price: $63.00
Regular Price
The Twin Spot is a multi-purpose pickup for vibrating musical instruments.  Two heads can be better than one - positioning at two spots results in a more balanced sound structure, and a broader...

MSRP:
Our Low Price: Special Price: $3,250.00
Regular Price
I'm helping Bob Gollihur -- my dad, and the original founder of Gollihur Music, now retired -- sell off some of his "extra" personal bass gear. This bass is an '82 Fender Walnut Precision Bass...

MSRP:
Our Low Price: Special Price: $257.68
Regular Price
Don't be fooled by the "slap" in their name -- this is far from a one-dimensional string set. It's what I would call the first legitimate "three-way hybrid" set. It's equally well-suited for pizz,...