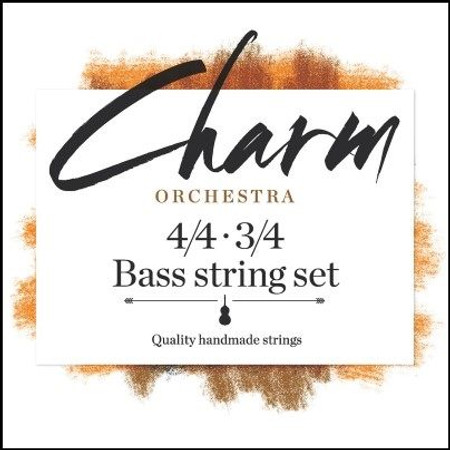 These strings are hand-made in Beijing, China, and are surprisingly good for the money. Aimed primarily at Orchestral players, they are similar in feel and vibe to some of the higher-priced arco-specific strings we also carry -- but are priced for the player on a budget! Perfect for early learners (1/4 and 1/2 size sets are available), or college students (every dollar counts, you need money for Ramen!) you'll get a very warm, responsive tone under the bow from these strings. They are definitely a bit stiff, which isn't unusual for an orchestral string, but they "start" easily and don't take a lot of pressure to keep a good tone.

They're really nicely done, with a smooth outer surface, very clean windings, and nice unfrayed silks; you'll likely be impressed. But the proof is in the pudding - they are well-balanced, with lovely nuance and a pleasant "mellow" vibe.

One of our longtime, trusted customers recently weighed in on these strings (he put a set on his bass for a week to give them a test-drive), and he offered the following thoughts:

Another player offered his take on the strings:

While the sets for 3/4 and 4/4 size basses are a steel core with an alloy winding, the smaller sized (1/4 and 1/2) strings use a tungsten blend of steel for the core. Tungsten steel has a higher mass than regular stainless, and as a result, you can use less of it and still have the same fullness of response. As a result, the strings can be a little thinner and easier to manage on smaller basses (which are commonly played by smaller humans - like kids - so this is a nice advantage). Note that the 1/4 and 1/2 size strings are therefore branded as "Charm Kids" strings. That doesn't mean you have to be a kid to play them! Because of this special blend of tungsten steel, though, the smaller sized strings are a little bit more expensive.

MSRP:
Our Low Price: Special Price: $150.00
Regular Price
As you've probably gathered from reading our string descriptions, the selection of string can make a profound difference in r

MSRP:
Our Low Price: Special Price: $150.00
Regular Price
As you've probably gathered from reading our string descriptions, the selection of string can make a profound difference in response,

MSRP:
Our Low Price: Special Price: $3,250.00
Regular Price
I'm helping Bob Gollihur -- my dad, and the original founder of Gollihur Music, now retired -- sell off some of his "extra" personal bass gear. This bass is an '82 Fender Walnut Precision Bass...

MSRP:
Our Low Price: Special Price: $148.00
Regular Price
These strings are one of my personal favorites for my own particular double bass needs -- but that doesn't mean they are perfect for you. I like them for their versatility and articulate sound. These...

MSRP:
Our Low Price: Special Price: $75.00
Regular Price $85.00
We've had lots of requests for more affordable strings for developing players; the Preludes from D'Addario are just that. Prelude bass strings are multi-stranded steel core strings that are...