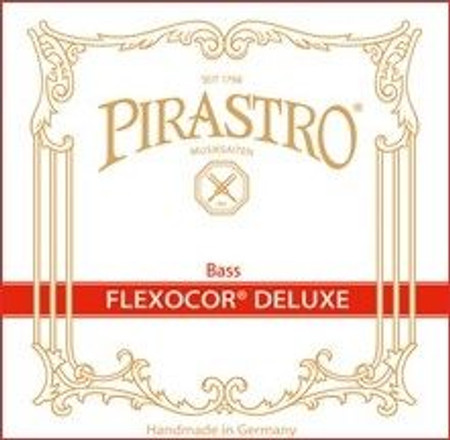 The FLEXOCOR DELUXE Bass string is Pirastro's newest version of their Flexocor "rope core" string set. No, it's not made of rope - the carbon steel strands that make up the core of the string are wound in a rope-like pattern. The original Flexocor (still sold as "Original Flexocor") have a somewhat brilliant sound, whereas the standard "Flexocor" strings have a more traditional arco orchestral vibe; a little more tempered so they aren't so brash under the bow.

The Flexocor Deluxe seem to fall between the two extremes. Digging in for a solo passage, you can really bring out a clear, detailed tone - but with a more relaxed hand, big arco warmth is right under your fingers. It's kind of like getting "The Best of the Flex."

Pizz-wize, they have a solid, full-bodied fundamental, and an attack that has a nice defining "plunk" at the front of the note to help lock in the note and not sound "flubby." They are a darker choice, tonally, than many other steel-cored strings - even those with similar construction (like Superflexibles or Corelli 370s) - but that might be exactly in your wheelhouse. The pizz tone is actually not too far from what you get from the Evah Pirazzi (synthetic-core) strings, also made by Pirastro. But the Flexocor Deluxe features a steel core.

Who cares? You might! With a steel core, pitch stability is less of a concern; they'll be (and stay) up to pitch consistently with less of the "stretching in" time that synthetic-cored hybrid strings usually require. They also have less "roll" under the plucking fingers than a nylon core (Obligatos are famous for this). And the steel core makes them long-lasting, as well.

If you go by the numbers, tension-wise, they're comparable to Thomastik Spirocores - but with the more flexible core design, they have a softer, less stiff feel under the hands, making them feel lighter.

Compared to other similar strings, the tension on the D and G are a little lighter than average, with a beefier E and A. That may somewhat account for the ability to cross over from "full and dark" to "focused and brilliant" that Pirastro describes these strings to have.

All strings have red with white spiral thread at the tailpiece, and the following colors at the pegbox:

MSRP:
Our Low Price: Special Price: $59.55
Regular Price
The FLEXOCOR DELUXE Bass string is Pirastro's newest version of their Flexocor "rope core" string set. No, it's not made of rope - the carbon steel strands that make up the core of the string are...

MSRP:
Our Low Price: Special Price: $235.00
Regular Price
The core material of this string is a high-tensile rope made from carbon steel which is wound with chrome steel. It is a very good all-around orchestral string, as it has a very familiar and typical...

MSRP:
Our Low Price: Special Price: $221.40
Regular Price
The major string-makers are always looking for ways to innovate, and Pirastro's newest (July 2019) entry into the fray is the Perpetual String Set. Pirastro says, off the bat, that they are "mainly...