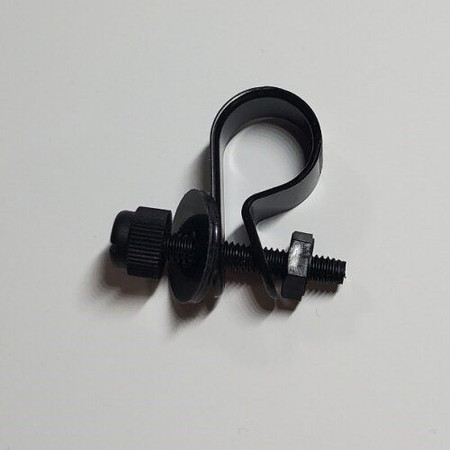 David Gage includes a plastic loop mount to mount the output jack of their Realist pickups to the tailpiece. Their solution is to fully remove the E string from the bass, thread the string through the loop, and allow the ball end of the string to hold the jack loop in place.

Years ago, we had a ton of folks asking us for a better means of mounting the jack. They -- understandably -- didn't want to have to go through the hassle of removing the string, but they also didn't want to sacrifice having a confident, secure way to install and access the jack. So we got on it, and this is what we came up with.

Not only do we now include this kit for free with every Realist, Realist Lifeline, and Krivo pickup we sell, but in working with KNA during the development of their DB-1 pickup, they asked us about jack mount options and we clued them in to our solution. And that's what is included with the KNA pickups now.

Every once in a while, we get asked if we sell these kits - until now, I've demurred. But the requests keep coming, so here it is.

You get a four piece hardware kit, which includes:

The mount is black, making it very indiscreet - particularly on an ebony/ebonized tailpiece. And it weighs less than a gram - it wouldn't even activate our digital scale - so it's ultra light weight. Very easy to install, with no tools required.

Note: The nylon loop that we include works with average-sized inline 1/4" jacks; the molded plastic jacks on the Realist pickups are larger in diameter, and our loop will be too small to fit the Realist jack. However, the Realist pickups each come with two of the larger sized loops (those are the ones they suggest that you feed the string through) so you'll use that loop instead, with the other parts in this kit, to mount your Realist jack.

MSRP:
Our Low Price: Special Price: $4.00
Regular Price $6.00
For years, we sold the Schaller 411 magnetic pickup for upright bass. It was a well-known, long-running product with a reliable, feedback-free sound and a nifty "art deco" sort of look. Schaller has...

MSRP:
Our Low Price: Special Price: $7.00
Regular Price
If you need to rewire, or customize, the output jack on your bass pickup, this is a very nice quality inline jack to do it with. Made by Rean (a Neutrik subsidiary) it's very solid-feeling and...

MSRP:
Our Low Price: Special Price: $124.00
Regular Price $159.96
The RB series of pickups from Schatten Design are simple, affordable, good-sounding pickups. One can easily see the similarity in design to the Bass Max from K&K sound, but our "A-B" tests have...

MSRP:
Our Low Price: Special Price: $225.00
Regular Price
The Red-Eye preamp can be a simple, and very effective, solution for getting pure sound with high-impedance piezoelectric pickups -- you know, the kind very commonly found on upright basses (as well...