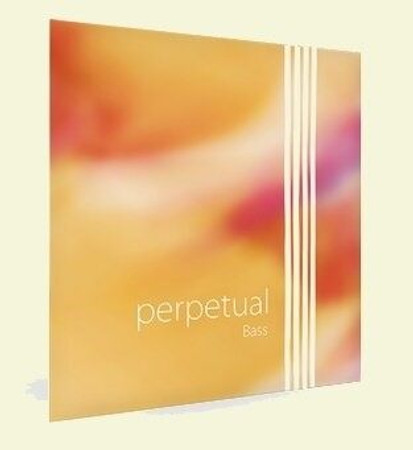 Submit a product review & get 100 BassBucks for each publishable review!

(you must use your real name to get credit)

For one, their feel is definitely on the flexible side, feeling more like Pirastro's Obligatos (without the "roll") than their Flexocore Deluxe, which is on the stiff side. While they felt a little "tight" when we first put them on, they seemed to settle down pretty quickly (like, within minutes, not days). Tension is comfortable, and gauging is a hair or two thinner than many of their other popular offerings. They have articulation, but they're not overly "brash" - having a nice warmth with a clear fundamental pitch. It's a nice balance that many strings strive for, but don't always achieve.

What about arco? Well, in their words, "When played arco, the Perpetual bass has a clear yet complex tone with an intense power that can be felt by the musician as well as the listener. With their effortless left hand feel and an astonishingly quick bow response, the Perpetual allows the player to practice for long periods of time with little fatigue."

Pirastro heard you! Customers have responded to the Perpetuals, saying that they LOVE how they sound and play - but some have mentioned that the higher strings are a little on the "thin" side. The string designers at Pirastro have now engineered new G and D strings that have a beefier feel AND tone, and many players have already fallen in love with this new version. It has a lot more stuff going on inside, and as a result it is more costly to produce (and sell) than the "regular" version strings from this set. But they are a very special strings (particularly the G-string), and I expect them to cannibalize sales of the very popular Oliv G and D strings - they're that good!

We have the Stark G and Stark D set up for separate purchase, as well as available in the packaged sets (we substitute out the standard G string for the "stark" string).

MSRP:
Our Low Price: Special Price: $99.95
Regular Price
Supernils are a bit of an oddity in the Upright Bass World... they do have a big and fat, boomy sound, which can be a bluegrasser's delight, b

MSRP:
Our Low Price: Special Price: $299.00
Regular Price $339.95
Dominants are a long-time favorite of a lot of players due to their gut string-like character with more stable intonation, and less susceptibility to changes due to temperature and humidity. They...

MSRP:
Our Low Price: Special Price: $274.02
Regular Price
The core material of this string is a high-tensile rope made from carbon steel which is wound with chrome steel. It is a very good all-around orchestral string, as it has a very familiar and typical...

MSRP:
Our Low Price: Special Price: $259.00
Regular Price
These stable, rope-core strings are particularly suited for arco and solo playing. They have a clear and well-focused sound, very qui

Special Order Item:
May require ordering from manufacturer
FREE SHIPPING:
To all 50 US States

MSRP:
Our Low Price: Special Price: $257.68
Regular Price
Don't be fooled by the "slap" in their name -- this is far from a one-dimensional string set. It's what I would call the first legitimate "three-way hybrid" set. It's equally well-suited for pizz,...

MSRP:
Our Low Price: Special Price: $262.62
Regular Price
Pirastro's popular Obligato strings have a solid synthetic core with a very thin metal wrap. They were designed to emulate gut strings, and they did a darn good job of creating such a string. Their...

MSRP:
Our Low Price: Special Price: $148.00
Regular Price
These strings are one of my personal favorites for my own particular double bass needs -- but that doesn't mean they are perfect for you. I like them for their versatility and articulate sound. These...

We've been fielding requests to add Oliv strings for quite a while, and they're finally here! The Oliv is a natural gut string wound in chrome steel (as opposed to the Eudoxa, which are wound in...