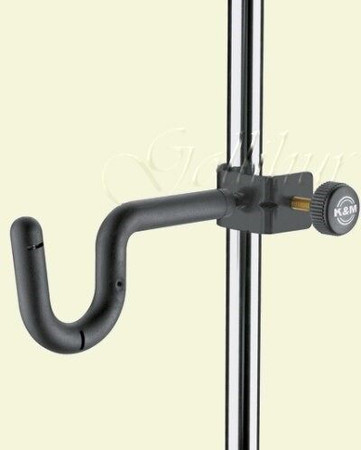 I hate taking the calls from players (or their parents) whose bow took a dive off the music stand or chair. A bow is as much a musical instrument as your bass is, and they can be very easily damaged from a fall or a rap against a hard object. A cracked tip or broken bow is an avoidable heartache.

But when you're not actually playing arco, you need to keep the bow handy. So what's the safe way to do it?

We have a small, affordable, handy plastic clip that attaches to the lip of a mic stand, and that's one good option, especially if you need something super portable. But if you'd rather hang the bow a bit lower on the music stand, or perhaps on an instrument stand or stool leg instead, here's your option.

This is a really nice, strong hook that attaches to a tubular leg or similar, so it works on a large variety of stands and chairs, with diameters up to 1.18". It's made of steel, and the business end is covered in a non marring rubbery-plastic material; it is about 1/2" in diameter. This is likely too large to go completely into the thumb recess on a french bow frog (it is on our bows), but small enough to hold the bow securely since the hook has a "dip" in it. It is certainly among the most "safe" means of hanging a bow, as it "clamps" to the stand leg quite strongly. It's strong enough to support several pounds, so it's sturdy -- but it weighs well under half a pound, and travels almost flat for easy transport.

This helpful gadget is simple, inexpensive, and a great insurance policy for your valuable bow. Works with French or German styled bows (note that the thumb grip opening on some French bow frogs may not be wide enough to fit fully around the hook, but it still partially straddles it, and the hook still holds the bow quite securely.) It holds your bow about 4.5" out from the stand it's attached to.

Our products have a 5 year warranty. In addition, we offer a replacement part service on all our catalogue products for 10 years.

Under the terms of these conditions, König & Meyers warranty covers all defects which are verifiably material defects or manufacturing defects for the period of the warranty.

The guaranty does not cover the following: Should you have a defective product that is covered under warranty, please email us ( info@connollymusic.com ) with the following information: Should the warranty be put into effect, warranty entitlement is neither extended nor restarted.
View AllClose

MSRP:
Our Low Price: Special Price: $129.00
Regular Price $149.99
It's just a stand, what's the big deal? For years, I used one of the light weight Hamilton bass stands that has a similar design to this stand. While lightweight and portable, the Hamilton's...

MSRP:
Our Low Price: Special Price: $139.00
Regular Price $164.99
For a long time, we've fielded requests for "a stand that will work with my Electric Upright Bass." The Ingles SA22 we've had for years will work with some of the EUBs -- as long as they have at...

MSRP:
Our Low Price: Special Price: $199.00
Regular Price
NS Design has cleverly designed their instruments with several options for playing. Their larger instruments (including all of the CR/EU Basses, NXT and WAV basses and BassCello models) use a...

Folding Stand for Double Bass by On Stage

MSRP:
Our Low Price: Special Price: $84.95
Regular Price
Upright Bass Stand -one of the most stable stands you'll find!For years I reluctantly used my old bass stand - the old Hamilton stand that had the little "cup" you had to aim for (and often missed on...