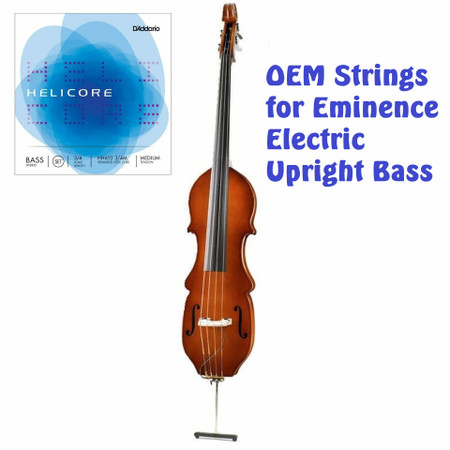 The Eminence electric upright bass is a longtime favorite of ours, and of our customers. It is capable of handling a large number of strings designed for 3/4 size upright basses, but if you were happy with the sound and feel provided by the stock strings, here are the sets that come as "OEM" strings on the bass as provided by the manufacturer.

The strings are the Helicore Hybrid set - but the G string has been substituted with a Helicore Orchestra G string. Presumably, this is done to provide a better balance of tone and volume, considering the tonal quirks that may occur with the smaller body of the Eminence. All we know is that it works well!

For five-string basses, the Low B is added to complete the set. For high-C tuning, though, there is no Helicore high C string - for that, the best match (and the string recommended by the luthier who developed the Eminence) is the Pirastro Jazzer high C string. So that's what we've included with that set.

I've experienced a problem with a string (or set of strings). What should I do?

We are sorry to hear of your experience. If you experience a problem with your strings (or string set), you may contact us (D'Addario) to see whether a manufacturing mishap is the cause. If you wish to return the string(s), visit http://www.daddario.com/ra. Please return the string or set in question in its original packaging (including corrosion intercept bag if possible). This will help us determine if a defect or other malfunction has occurred. Upon receipt and evaluation, if a manufacturing defect is revealed, we will quickly send you a replacement.

NOTE: Though it may not be the case in your situation, please keep in mind that premature string breakage is often caused by burrs or rough edges that develop at the nut or bridge/saddle. These rough edges are often difficult to see, but can be ruthless on strings. If your string continuously breaks at the nut or bridge, please check these points of contact for a nice, smooth surface. If burrs or rough edges are found, contact your local music shop or luthier to perform the necessary minor repair to resolve this common problem.
View AllClose

MSRP:
Our Low Price: Special Price: $1,419.00
Regular Price
Full Scale • 4 and 5 String As you may already know, the NS Design Electric String Instruments have a long history. Their electric upright basses have been made and refined for decades, and are...

Eminence Padded Gig BagOEM, as included with all Eminence BassesEminence includes this very nice soft-sided gig bag with their basses. It's well-padded and includes several useful pockets and handles...

The Eminence Bass Stand is available separately for current Eminence electric upright bass owners. It is made by Hamilton, but has a custom receiver at the base, specifically designed to accept the...

MSRP:
Our Low Price: Special Price: $60.00
Regular Price $118.00
Important: These strings are "take-offs" - which means that they are strings that had been installed on a brand new NS Design electric upright bass from the factory. They were removed and replaced...

I first fell in love with the Eminence electric upright bass (EUB) at the January 1999 NAMM show. After I started to play it, I didn't want to stop. As a bassist who started on double bass, I still...

MSRP:
Our Low Price: Special Price: $16.00
Regular Price
Whenever you put your bass down on its side, you risk scratches, dents, or chips in the edges! Choose one of these simple sets of 4 stick-on protectors to provide "bumpers" or "feet" that will...