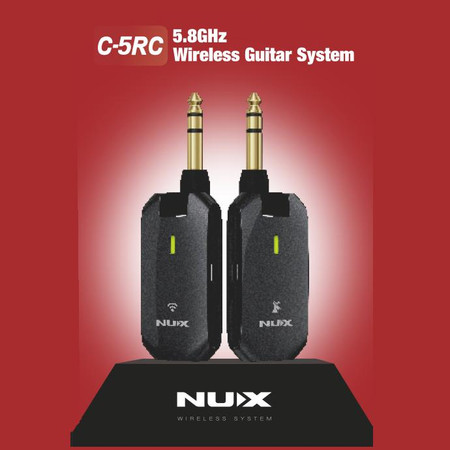 SKU:
UPC:
FREE SHIPPING:
To all 50 US States
Active Pickups? Preamp?:
Please take note of the section about compatibility with TRS output jacks, below, before ordering.

Going wireless with an upright bass is becoming more and more popular. Maybe you're one of those crazy rockabilly guys who moves around a lot, or spins their bass for show. Or maybe you're doing a stage show, where a bass needs to get on and off stage quickly. Whatever the reason, sometimes you just want to cut the cord.

You'll always find us talking about how it's important to plug into an input that will appropriately buffer the very high impedance of piezo pickups. But you only benefit from that buffer if the pickup is plugged directly into the preamp - put a wireless system between the preamp and the pickup, and the input impedance of the preamp becomes (essentially) irrelevant.

So, if the wireless system has a low impedance input (common) you need to plug the pickup into a buffering preamp first, THEN into the wireless transmitter (which means TWO small boxes/components hanging off the bass). Or, if you know better, you'll instead find a wireless system that offers the higher input impedance so it will properly buffer the signal itself.

Unfortunately, many (most?) manufacturers don't specify input impedance on their transmitters -- and most of the ones who do intended the units to be used for electric guitar and bass, not a piezo-equipped acoustic instrument. So they commonly have a lower input impedance, making them less suitable for high-impedance piezo pickups.

Luckily, I discovered that the wireless systems from NUX are over the "minimum" of 1 MegOhm that we normally recommend (many of the acoustic preamps we sell feature around a 1 MegOhm input impedance.) Plus, the NUX transmitter and receiver units are VERY small, with no cables, wires or bodypack - and they both feature built-in rechargeable Li-Ion batteries that last up to 4 hours per charge, so you don't need to worry about stocking up on 9v batteries or wall warts! (it includes a split USB cable for charging with plugs you almost certainly already have).

I previously had another wireless setup that was very popular and worked well. But this new one from NUX has several new advantages over that system:

The Nitty Gritty: The NUX Digital Wireless System is a 5.8GHz wireless band setup, with 24 bit, 44.1kHz audio quality, that works great with upright bass. I know it, because I tested it. In fact, I tested it on an upright with a couple different passive pickups, as well as on the Eminence (with David Gage pickup) and the NS Design NXT (passive) bass. It worked admirably on all of them, adding no discernable artifacts to the tone, and barely affecting the overall sound (if at all).

It has a huge 20Hz–20kHz frequency response range (well below and above the frequencies that a bass can produce) and has a 100 ft. line-of-sight range, great for most any stage. It's a modern system, compliant with all current FCC regulations, and no license is required.

The transmitter and receiver are both tiny, and feature swiveling jacks, so you can plug them in and tuck them behind the tailpiece (like in the photo) or down flat against the surface of the input jack.

The thing is rock solid, beautifully packaged, sounds great, and very affordable. Can't really ask for much else.

NOTE: Due to specific manufacturer requirements, we can only sell these units within the USA.

MSRP:
Our Low Price: Special Price: $229.00
Regular Price
We've had a lot of requests for a case for the NS Design basses; even though NS Design does make an ATA-Rated flight case (originally for their CR model line, it also fits the WAV4 and NXT), it...

MSRP:
Our Low Price: Special Price: $1,950.00
Regular Price
I've often been asked about Hard Cases for bass. We also carry a lightweight case that has a wood subframe (see related items, below), with the majority of the case being made of a structural dense...

MSRP:
Our Low Price: Special Price: $130.00
Regular Price $159.00
For years I've taken occasional calls from a player who is looking to take their double bass wireless. Maybe they're one of those crazy rockabilly guys who moves around a lot, or spins their bass for...

MSRP:
Our Low Price: Special Price: $299.00
Regular Price $499.00
This is a brand name flight case that is made specifically for the Warwick Triumph basses. It is a part of their professional line, and is made of 12 mm plywood with aluminum edges and chrome-plated...

MSRP:
Our Low Price: Special Price: $109.00
Regular Price
The Sugar Slaps are designed to emulate gut strings (for slappers, particularly) in a durable, affordable synthetic option. The early feedback on these strings is that they do it very well - players...