There's a strongly held opinion that the setting up and repair of the doublebass is some sort of a "mysterious art;" that things that involve making some sawdust on one's bass should only be done by professional luthiers. And yes, there is definitely some merit to that point of view -- there are jobs that require an in-depth understanding (and quite often, expensive, specialized tools). And, as I have learned from experience, some of the bigger, more complicated jobs actually cost less, in the long run, if you have them done by a competent repair-person (rather than messing them up yourself and subsequently paying someone else to fix your mistakes).

And that's why we have an extensive, free directory of luthiers on our site for your convenience, for those jobs that are above and beyond what a hobbyist should probably attempt.

One of the many useful habits I inherited from my Dad, Bob, is the willingness to just jump in and fix something when it breaks down. Yes, "I know enough to be dangerous" has turned out to be more of a truism than I'd like to admit, on occasion. But more often than not, I've been happy to discover that a little patience, some knowledge, and a positive attitude have gotten me through, whether it be repairing a minor plumbing issue in my home, rebuilding the front end of the car I carelessly slid through a stop sign as a teenager, or making some basic adjustments on my bass. 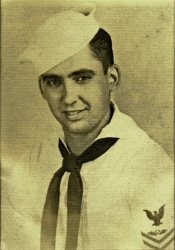 I'm pretty sure that Bob, in turn, learned this trait from his father. My Grandpop, Estle Louis Gollihur (at right) was a man who worked with his hands his whole life; even in retirement, he had a workshop in his basement where he made furniture, stained glass, wooden trinkets and clocks with fancy scroll-work -- whatever tickled his fancy. And, he often said those words above: "If a man made it, another man can fix it." (Worth noting: He also used to love to say "if it won't fit, form it." That's probably not very good advice when it comes to fixing your upright bass.)

His "I can fix anything" attitude is what enabled Bob to obtain his first upright bass, which was a "rescue" from the basement of a neighbor. It had no hardware, no fingerboard, and a garish paint job (it had last been used as a magician's prop!) My Grandpa, who until then had no real experience with the specifics of working on musical instruments, set to work with my Dad (then a teenager) rehabbing that bass. They sourced parts, they did some reading and asking around, and they were able to bring that bass back to life.

That '41 Kay bass (at left) was the one that Bob later took to college, and has played about a zillion gigs on. And my Dad still has -- and plays -- that very special bass to this day (in spite of its unusual past, it really sounds amazing!)

And, as you might have picked up on, this father-son bass experience led my Dad to christen our special lineup of Laminated and Carved Basses with the name "Estle Louis," as a quiet sort of tribute to his own dad's contribution to his musical journey. Later, and more obviously, I named our hardscrabble rockabilly bass "Ed" - which is the more "down-to-earth" name that most people used to address my grandfather. 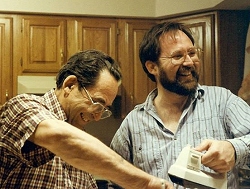 So, now you've met my grandfather, on this brief, self-indulgent detour down memory lane. But it was all to say: yes, sometimes it pays to hire someone to do the job; if your bass needs big repairs, special work, etc., you should consult a pro.

But when it all came down to it, it was just another man (or woman) who built it, so if you've got a reasonable facility with hand tools, some of the less intensive jobs -- installing new strings, cutting a bridge, fitting a new pickup -- certainly could be within your skill set.

All you need is a little knowledge and perhaps a bit of swagger. And doing your own work can be a great confidence-booster and make you more familiar with your instrument (and how to make it sing).

We consistently do our best to provide you with as much help as we can, and we send you specific tip sheets with lots of the products we sell. And hey, if you want to check one of our tip sheets out before you buy, to see if you can handle doing it yourself? Just ask!